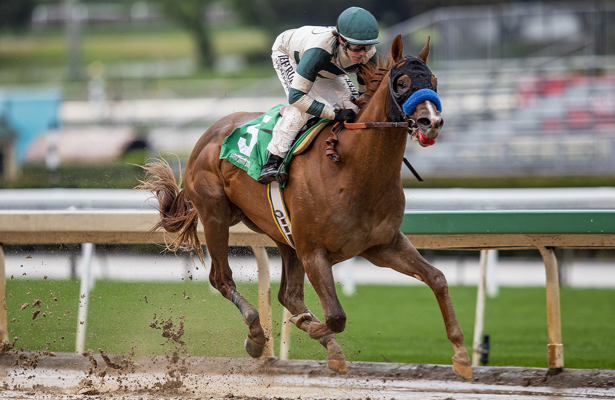 Already a Grade 3 winner at age 2, the colt swooped by pace-setting Magnificent McCool through the turn and opened up late in the slop at Santa Anita Park to earn 10 qualifying points toward the 2019 Kentucky Derby.

Whereas Mucho Gusto looked like a speed type in prior starts, this time he rated off the leader.

“You knew those horses were going to be out there going,” Baffert said. “It was nice that he idled. And then it looked like they were going to come to him a little bit. Then he kicked back, and that’s what you want to see this time of year. This is when it all starts.”

“I kind of had a feeling — I know on paper he looked like lone speed, but anytime you see that on paper, somebody tries to go, which they did today,” Talamo added. “He settled like he’s done it 100 times before.”

A son of first-crop sire Mucho Macho Man, Mucho Gusto was beaten in his prior start by stablemate Improbable in the Los Alamitos Futurity (G1). That one’s still undefeated, as is Game Winner, Baffert’s newly crowned champion.

The Hall of Famer is loaded locally, meaning Mucho Gusto will likely hit the road off this win, in which he completed 1 1/16 miles in a final time of 1:41.81 under jockey Joe Talamo.

“We’ve got Game Winner coming in, and then we have Improbable,” Baffert. “We’re just going to play it by ear and see how he’s doing. We want to go where he can win.”

Michelle Yu, reporting for Fox Sports, said Kid Cantina took a bad step and was loaded onto an equine ambulance after the Robert B. Lewis.

Petersen purchased two horses for this crop. One was Tale of the Union, a debut winner Petersen said is injured, and the other was Mucho Gusto, who hadn’t raced on a sloppy track, but breezed on it before commanding $625,000 at auction as a 2-year-old.

“In this business, we’re always dreaming, so I was hoping for something good,” Petersen said.