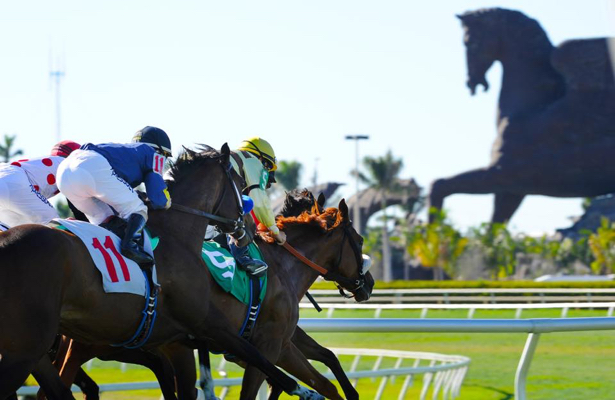 There will be three carryovers at Gulfstream Park on Thursday’s 10 race program.

The 20-cent Rainbow 6 went unsolved Wednesday at Gulfstream Park, producing a carryover jackpot of $143,865.97 for Thursday’s program. Multiple tickets with five of six winners were each worth $19,048.34. The popular multi-race wager has gone unsolved for the five racing days since a $580,349.19 jackpot strike by an XpressBet bettor Dec. 19.

The carryover jackpot is only paid out when there is a single unique ticket sold with all six winners. On days when there is no unique ticket, 70 percent of that day’s pool goes back to those bettors holding tickets with the most winners, while 30 percent is carried over to the jackpot pool.

Jockey Angel Rodriguez guided Tiebaj ($133.80) to victory in the eighth race to record his second triumph since arriving from Panama to participate in the Clasico Internacional del Caribe Dec. 8.

The 18-year-old jockey, who rode Rosa Salvaje to a second-place finish in the Copa Dama del Caribe, won his first race in the U.S. Dec. 14 in more spectacular fashion, scoring aboard Marcelino ($169.20) in Gulfstream’s 10th race.

“I want to ride here. This is where my dreams come true,” said Rodriguez through an interpreter.

Tiebaj, a 19-race maiden who finished eighth last time out, was only the 10th local mount for Rodriguez, who said he has ridden about 160 winners in two years of riding in Panama.