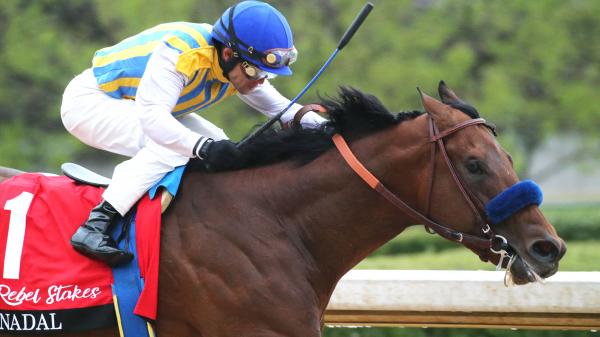 Instead, we have a very good pair of big races in the form of split divisions of the Grade 1 Arkansas Derby at Oaklawn Park, which occurred after 22 horses were entered to run in the race. Each division offers a $500,000 purse and 100 points to the winner via the Road to the Kentucky Derby qualifying series, with 40 to the runner-up, 20 to the third-place finisher and 20 to the fourth-place finisher.

The horses and connections hoping to succeed in the second division of the Arkansas Derby will have to beat the morning-line favorite Nadal to do so. Nadal won the Grade 2 Rebel Stakes at Oaklawn on March 14, leading from start to finish and earning a 101 Equibase Speed Figure. One race prior to that, in February, Nadal earned an even higher figure, 107, when winning the Grade 2 San Vicente Stakes. However, the San Vicente was a sprint, run at the distance of seven furlongs. Not only did Nadal earn a lower figure when stretching out to two turns for the Rebel, he was also tiring late in the stretch and losing ground to a fast-closing horse in Excession. Perhaps it was the faster than average early pace which caused Nadal to tire late, but this division of the Arkansas Derby may be run no differently than the Rebel, since contender Wells Bayou led from start to finish to win the Grade 2 Twinspires.com Louisiana Derby on March 21 and earned a 100 figure. From an extreme outside post, Wells Bayou will likely have to try to get the lead from the start, perhaps at any cost, in order to not be wide going into the first turn. Another horse likely to try for the early lead is Storm the Court, who posted a 45.90-1 upset in the Grade 1 TVG Breeders’ Cup Juvenile last fall when leading from start to finish. In his two starts this year, Storm the Court did not get the lead in the early stages, but that does not change the fact he appears to be a need-the-lead type. In addition to those three horses, Saratogian and Taishan may vie for the lead from the start or take up a stalking position behind the early leaders.

Given the probable faster-than-average early pace scenario, Farmington Road could easily improve off of his runner-up effort in the Oaklawn Stakes on April 11. The Oaklawn Stakes served as a local prep for the Arkansas Derby after the Derby was moved from April 11 to May 2. In that race, Farmington Road added blinkers for the first time, and after lagging in last of 13 early, rallied strongly to miss by a half-length at the finish. Two races before that, Farmington Road earned a career best 100 Equibase Speed Figure, followed by figures of 94 in a Grade 2 stakes at Fair Grounds and 95 in the Oaklawn Stakes. The pattern suggests he is improving once again, and considering his late kick he will benefit from a contested early pace, Farmington Road could pass the field to win this division of the Arkansas Derby.