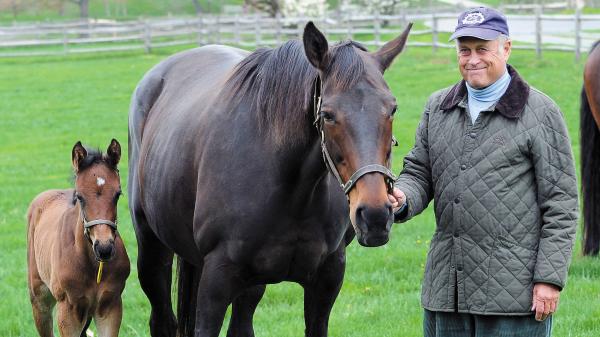 There are few certainties in life or in the sport of horse racing. But just as you can count on the changing of the seasons, you can count on Jonathan Sheppard sending out winners by the dozen, year after year, in tests of both pure speed and dexterity over jumps.

Sheppard is patient, skilled, and a craftsman at the top of his trade. How else can you explain the fact that he won at least one race at the competitive Saratoga race meet every year from 1969 through 2015, an almost unfathomable streak of 47 years?

Born in Ashwell, Hertfordshire, England in 1940, Sheppard initially seemed destined for life as a stockbroker in his family’s business, and to his credit he did give the task a try for a time. But early in his adult life, Sheppard knew he wanted to work with horses and went to great lengths to make his dream come true, beginning when he left his job in 1961. “[I] wanted to train horses and not sit in an office all day,” Sheppard explained in the Aug. 10, 1990, edition of the Owensboro, Ky. Messenger-Inquirer.

Fulfilling that dream would be easier said than done for Sheppard. Training in England seemed out of the question since he was the son of a racing official, and the rules of British racing would thus have restricted Sheppard’s ability to participate as a trainer. No matter though – Sheppard simply pulled up stakes and moved to the United States, where he rode races and worked as an assistant to steeplechase trainer Burley Cocks before going out on his own in 1965. Fittingly, Sheppard scored his first victory the following year with Haffaday, a tough-as-nails jumper whom Sheppard would eventually train to victories in the 1967 Pennsylvania Hunt Cup, the 1968 New Jersey Hunt Cup, and the 1968 Maryland Hunt Cup.

More than five decades later, Sheppard’s results are nothing short of staggering. His horses have earned over a million dollars in purse money every year since 1982. He’s trained the winners of more than 3,300 races, including more than a thousand steeplechase events. He’s trained champion flat runners and steeplechasers, including the Hall of Fame inductees Flatterer and Café Prince and the Breeders’ Cup champions Forever Together and Informed Decision, the latter three all owned by his longtime client George Strawbridge, Jr. He’s led all steeplechase trainers in North America by earnings on 28 occasions and by wins 25 times. And – oh yes – there was his streak of success at Saratoga, where he was the leading trainer in 1984 and 1985.

How has he done it? Sheppard’s career has been built on patience and perseverance. He’s willing to take his time to work through the quirks and needs of individual horses and uncover their full potential, even if it requires thinking well outside the box.

One of Sheppard’s best flat runners, Forever Together, had to work through a myriad of issues before she found her championship form. Karen Johnson, writing for BloodHorse.com, noted how Forever Together would occasionally refuse to train and had trouble running to her potential on dirt because she didn’t care for kickback. Patience and a switch to turf remedied these issues, but a bigger one still remained – she was unable to sweat very well, an obvious problem for a racehorse. Sheppard’s solution? He “started feeding her Guinness Beer because he said it helps to promote perspiration – an added bonus is that she likes the taste and therefore cleans up her feed.”

Sheppard’s willingness to experiment certainly reaped great dividends with Flatterer, arguably the greatest horse he has ever trained. Some might have given up on the Pennsylvania-bred gelding after he lost 14 of his first 18 starts, including nine claiming races at tracks across the East Coast. But then Sheppard gave Flatterer a try over fences and the son of Mo Bay turned into an absolute beast, utilizing his terrific stamina and athleticism to dominate some of the most prestigious steeplechase and hurdle races in North America. By the time he retired in 1987, he had won four straight Colonial Cups and four straight Eclipse Awards as champion steeplechaser.

Truthfully, Sheppard’s training techniques are uncommon in North America, bearing a much closer resemblance to approaches found in Europe. His base of operations isn’t a racetrack like Santa Anita Park or Belmont Park – it’s his own Ashwell Stables in Pennsylvania, a facility uniquely its own. You can forget timing workouts with the bland precision found at racetracks; Sheppard’s horses tackle high-speed breezes in the “100-acre field,” where distances are less than exact and times must be considered in context with the specifics of the course.

Sheppard’s style of training could be considered more old-fashioned than most, and in the best possible way. His horses are able to spend more time outside than they would at a racetrack. They’re able to train left-handed and right-handed while negotiating hills and undulating ground. This, coupled with Sheppard’s patience, has allowed him to bring high-class but delicate horses back from long layoffs. Just consider his work with the veteran Cloudy’s Knight, who returned from a tendon injury to win three graded stakes races in 2009, when he was 9 years old.

These days, Sheppard sends out fewer starters than he used to, and it’s been a few years since he topped the rankings of steeplechase trainers. But the occasional big winner still comes his way – he sent out All the Way Jose to win the Grade 1 Lonesome Glory Handicap in 2017 – and for all we know his next champion could be just around the corner.

Just like his horses, you can never count out Jonathan Sheppard.