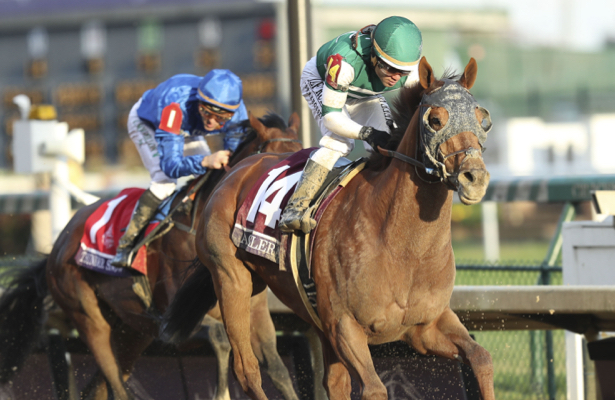 Gulfstream Park’s Pegasus World Cup returns on Saturday, January 26, for its third running, this time with a purse of $9 million.

Once again, America’s richest thoroughbred race will feature a big betting favorite and likely winner in Accelerate. He will attempt to join prior winners Arrogate and Gun Runner in taking the Pegasus immediately following a victory in the Breeders’ Cup Classic.

How good is this year’s field? Seven of the 10 horses listed below as probable runners are millionaires, six are Grade 1 winners, six ran in the Breeders’ Cup, and three horses have never run off the board.

Combining probable and possible runners from Horse Racing Nation’s Stakes Tracker, here is a projected look at the field for the Pegasus with the odds a projected morning line should they enter. Please note that this line does not balance, as the field will be limited to 12.

Accelerate [ML 2-1 – Lookin At Lucky – J. Sadler/J. Rosario – 22: 10-5-5 – $5,792,480] There is little you can hold against the champion Older Male Dirt horse in waiting when handicapping this one. He won $5 million of his total earnings in 2018, a year that included a 5-for-5 record in Grade 1 races. Pegasus World Cup history is on his side given the wins by Arrogate and Gun runner that preceded.

Audible [ML 6-1 – Into Mischief – T. Pletcher/J. Castellano – 8: 5-1-2 – $1,220,520] Keep in mind that in an eight-race career, Audible has five wins and has never missed the top three. His Grade 1 victory came in the Florida Derby at Gulfstream. His second-place finish in the Harlan’s Holiday in December could be viewed as a disappointment, but he cannot be ignored in this race.

City of Light [ML 5-1 – Quality Road – M. McCarthy/J. Castellano – 10: 5-4-1 – $1,662,600] The dazzling winner of the Breeders’ Cup Dirt Mile is another one who has never finished off the board. He was also the only horse to defeat Accelerate in the 2018 when going 1 1/8 miles — the Pegasus distance — in the Oaklawn Handicap (G2). Nine furlongs seem to suit him more than some other important horses in the race.

Kukulkan [ML 40-1 – Point Determined – F. Gutierrez/I. Ortiz Jr. – 14: 14-0-0 – $73,650] – Unbeaten in his first 13 races in Mexico, his lone start away from Hipodromo De Las Americas was a victory in the Clasico del Caribe at Gulfstream on December 8, which was restricted to 3-year-olds that were bred in a Caribbean country. A 71 Beyer Speed Figure there makes him a longshot here.

McKinzie [ML 6-1 – Street Sense – B. Baffert/M. Smith – 7: 5-1-0 – $1,086,000] McKinzie has made only seven career starts, including his big victory in the Malibu Stakes (G1) which came after his disappointing performance in the Breeders’ Cup Classic. He will be looking for his first victory against older horses in the Pegasus.

Patternrecognition [ML 12-1 – Adios Charlie – C. Brown/J. Ortiz – 11: 5-5-0 – $812,325] Chad Brown has this 6-year-old in the best form of his career while putting together two big wins in the Cigar Mile (G1) and the Kelso (G2). Prior to those races, Patternrecognition was strictly an allowance horse. His speed will make him a threat on a track that is kind to that running style.