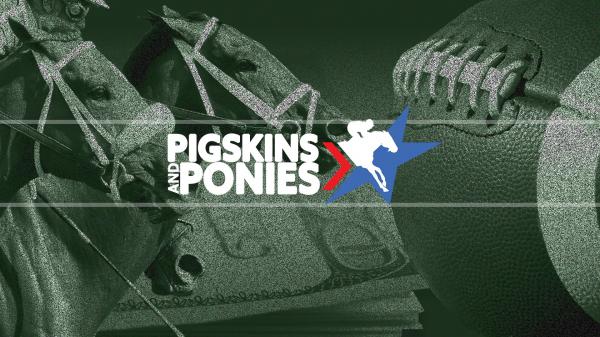 If you like betting both football and horse racing, you’ve come to the right place!

Each week in Pigskins and Ponies you’ll find analysis and key football bets from Payne Insider and Todd Fuhrman plus racing picks from Jose Contreras.

Professional bettor Payne Insider and former oddsmaker Todd Fuhrman are founders of Bet the Board, a cutting edge sports betting company focused on written and digital content. You can listen to Bet The Board podcast every Monday, Wednesday, and Thursday during football season on iTunes and Soundcloud.

Handicapper Jose Contreras is an analyst for horse racing network TVG and a regular contributor to America’s Best Racing.

Get this week’s picks below, and be sure to check back for new selections each week. Happy betting!

When breaking down this game, we can’t help but think back to week five when the Jaguars went into Arrowhead Stadium, closed +3, and if not for Blake Bortles turning the ball over 5 times, played the Chiefs extremely tough. This Ravens team is better defensively, and is running the ball more efficiently with Lamar Jackson at the helm (KC 32nd in rush efficiency defense), and the Chiefs are without the services of Kareem Hunt. The Ravens bully teams, and they should have success on both sides of the ball here. Grab +7 before it’s all gone come Sunday morning.

The reasons Baltimore is “the side” are the same reasons to look to the under. Baltimore’s offense is built at this current moment for the “four yards and a cloud of dust” style, and that lends itself to longer drives, more possession for the Ravens, and Patrick Mahomes on the bench. As mentioned first on Bet the Board the Baltimore offense also operates at a slower pace with Lamar than with Joe Flacco.  Even when the Chiefs do have the ball, Baltimore is seventh in defensive explosive pass rate, third in adjusted line yards, and eighth in adjusted sack rate. Expect the Chiefs to have to work for everything they get here, and as long as Lamar Jackson takes care of the football, the under is the move.

The Broncos have been on fire of late, with three straight wins against the San Diego Chargers, Pittsburgh Steelers, and Cincinnati Bengals, but recently lost their best wide receiver in Emmanuel Sanders. Denver closed a four-point favorite at BetOnline.AG last week against Cincinnati, but this San Francisco team is MUCH better than their record indicates, and is certainly in better form than the Bengals. The 49ers are actually a net +0.1 yards per play, but their -20 turnover margin has crushed them. This number opened 4.5, quickly went as high as 6, and professional bettors dropped this Wednesday afternoon to the current price. San Fran +4.5 and +190 on the money line deserves a real hard look.

Seattle is a net -0.4 yards per play, but has been thriving on turnovers (+11) and Russell Wilson’s ability to keep them in, or play catchup in what feels like every game. Both teams are in desperation mode for the playoffs, so “motivation” isn’t a play here. Seattle’s defense is vastly overrated, and at 25th in defensive pass success rate, just what the Vikings need to get this offense humming again. The Seahawks are off a “phony” blowout victory over the 49ers, while the Vikings didn’t look so hot in the national afternoon game. This has led to inflation, and at +3.5, Minnesota offers a ton of value for those siding with the dog.

#1 Vibrance (5-2 odds) settled behind the leaders and then made a middle move to finish third in the Tito’s Handmade Vodka Breeders’ Cup Juvenile Fillies. I like that she has steadily improved in each start and she gave it a good effort in the Breeders’ Cup, proving the travel wasn’t a concern. She’s got enough speed to get into a good position going into the first turn, and I think that’s where the race will be won.