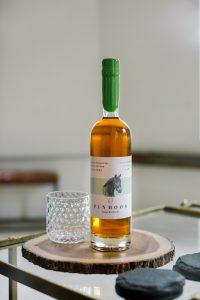 In late December I walked into one of my neighborhood liquor stores, the Brooklyn Wine Exchange, seeking a bottle of bourbon to give some friends for Christmas.

I was also struck by the price: around $38, low for a bottle of quality spirits in the neighborhood.

Of course, I bought a bottle as a gift for my friends, and of course, a bottle for myself.

Welcome to my new bourbon and rye of choice.

“Pinhooking” is the process of purchasing a young Thoroughbred (a weanling or a yearling) with the intention of selling it for a profit a year or two later. “Pinhookers,” the people that make that first purchase, don’t buy horses to race them; they buy horses to sell them.

With his partner Mike McMahon, Jamie Hill is one of the sport’s premier pinhookers; he and McMahon co-founded their eponymous bloodstock agency. They race horses in the name of Bourbon Lane Stable, and Hill is also the best friend of Jay Peterson, a TV producer who is friendly with Sean Josephs, known in New York for Brooklyn’s Char No. 4, a bourbon-based restaurant on Smith St. until 2015 and for the Flatiron District’s Maysville, which features Kentucky-inflected cuisine and, yes, bourbon.

“We were at the races one day,” said Hill recently, standing outside a private party he was hosting at Gulfstream Park on the day of the Florida Derby, “and Sean said, ‘I just bought 20 barrels of bourbon, and I don’t know what to do with it.”

All bourbon devotés, Josephs, Peterson, and Peterson’s wife Alice decided it was time to do “their own thing” when it came to the spirit, so in 2011 they bought 40 barrels of three-year-old bourbon from a distiller in Indiana.

It was Peterson’s idea to link the spirit to Thoroughbred racing, bourbon and racing being two of those great tastes that taste great together, and it was Hill who came up with the name after he heard that the partners wanted to re-sell the bourbon.

“That’s what we do with horses,” he said.

Added McMahon, “We buy about 15 weanlings a year to flip.”

“What we were doing with bourbon is what they do with horses,” said Josephs. “You buy based on lineage and sell when the product is more mature.”

As Peterson and Josephs pondered their next steps, they spent time in Kentucky and at the racetrack with Hill.

“Here are two things Kentucky is best known for: bourbon and horse racing,” said Josephs. “There are all sorts of associations between the two, but there wasn’t a single bourbon that was directly connected with Thoroughbred racing.”

So Josephs and Peterson approached Hill and McMahon with an idea: connect each year’s bourbon and rye with a Bourbon Lane Stable horse. Just as all the horses born in a given year are referred to as a “crop,” so too are the Pinhook spirits.

“You can buy the bottle and follow the career of the horse,” said Josephs.

Bourbon Country, who appeared on the 2018 bourbon crop label

“He was the best colt we bought that year,” said McMahon.

Thwarted in their attempts to sell him, McMahon and Hill, who are also partners in Pinhook, named the colt Bourbon War. He finished second in the Fountain of Youth Stakes at Gulfstream Park, and, sent off as the second betting choice in the Grade 1 Florida Derby, he finished fourth. He failed to qualify for the Kentucky Derby by a mere 9 points, ending up at #25 on a leaderboard of which only the top 20 horses make the big race. Bourbon War’s next race may be the Preakness Stakes on May 18.

Two weeks later, 18-1 Bourbon Resolution, featured on a fall 2017 bottle, won the Grade 3 Ben Ali Stakes at Keeneland Race Course. The Bourbon Resolution crop comprised only 15 barrels, and while bottles retailed at around $65, Josephs says that the few remaining bottles can command as much as $300.

Both Bourbon Lane Stable and the spirits company have found success this spring, on the racetrack and at a recent spirits competition.

In March, Pinhook’s 2018 Bourbon Country Cask Strength was awarded a gold medal at the San Francisco World Spirits Competition. The bottle retails in the $50 range.

Josephs opened Char No. 4 before bourbon got big, and he admits that he benefitted from the explosion of interest in the liquor over the last decade. He also saw the downside of the additional interest, which was a rise in prices as the drink became more popular.

“We really want our products to be affordable,” he said. “Our price points are generally between $33 and $45. We don’t want our product to be the kind of thing you stash away and drink once a year.”

Soon, Pinhook products will be produced at Castle and Key, a recently-restored 19th century distillery in Frankfort, KY, between Louisville and Lexington. According to Pinhook CEO Alice Peterson (she is married to Pinhook co-founder Jay), the company’s bourbon and rye are available in 23 states; the strategy is to build the brand slowly and retain the sense of personal passion that led to its founding.

“Sean is the one who goes on the road,” she said. “He goes to the accounts, he gets to know them. It’s nice to strike that balance of being hands-on and gaining ground in the market.”

Ironically, one of the tougher markets to crack is at racetracks, where sponsorship and other relationships already exist.

“Obviously,” said Josephs, “we should be at every great racetrack in the country, the connection is so strong.”

“Maybe,” he continued, “as we continue to grow, we’ll see more opportunities.”

An earlier version of this story incorrectly stated that the horse Bourbon Resolution had not been featured on a Pinhook bottle.