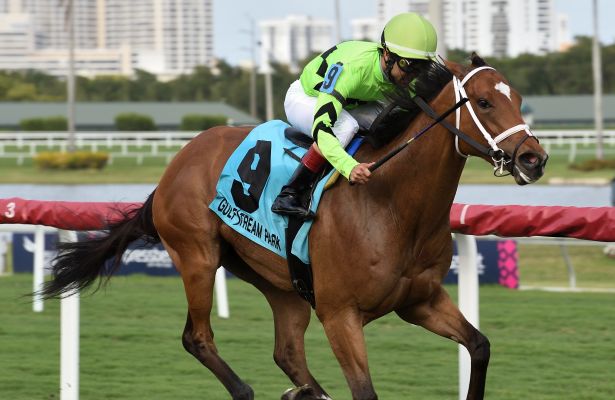 Klein Racing’s homebred Play On, racing for the first time in South Florida, stretched her win streak to three races in her stakes debut with a front-running 2 ½-length triumph in Saturday’s $75,000 Melody of Colors at Gulfstream Park.

The third running of the Melody of Colors for fillies and the fourth renewal of the $75,000 Texas Glitter, both for 3-year-olds going five furlongs on the grass, served as supporting stakes on a 13-race program headlined by the $100,000 Hal’s Hope (G3) for 4-year-olds and up at a mile on the dirt, won by Prince Lucky.

With regular rider Shaun Bridgmohan aboard for Fair Grounds-based trainer Brad Cox, Play On ($8.40) went straight to the lead from the far outside post in a field of nine and was never threatened. The winning time was 55.85 seconds over the firm turf course.

“She’s pretty straightforward,” Bridgmohan said. “She’s a pretty nice filly. Obviously, her record shows it. She loves what she does.”

Play On blazed through a quarter-mile in 21.56 seconds and a half in 43.93 chased by Just Ain’t Right, unbeaten in two career starts but making her grass debut. Play On, who had previous victories on both turf and dirt, turned for home in command and opened up on her rival, while Catch a Thrill came flying with a group of horses on the far outside to edge Just Ain’t Right for second.

“It was a nice effort,” Cox said by phone from New Orleans. “Ultimately it was up to Shaun, but she naturally has a lot of speed so it worked out really well. He did a tremendous job of just guiding her around there, to be honest.

“I think we thought there’d be a little speed in there,” he added. “We talked about it a couple nights ago and we thought there could be a couple horses that could show the way, but I think she just broke really well and she’s naturally fast. She put herself on the lead and it was all she wrote.”

The Melody of Colors is named for the Florida-bred multiple stakes winner bred and owned by Larry Foggle and trained by Tim Hills.