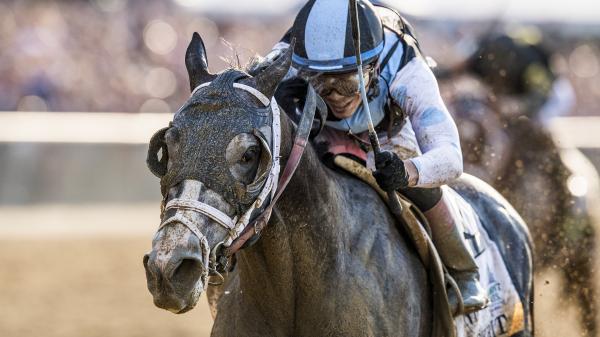 Any Belmont Stakes with a Triple Crown hopeful generates significantly more buzz than years when there is no chance for a sweep, but what does it mean for the actual race itself? Are we more or less likely to see a longshot? What should we expect as far as pace scenario?

The first thing that jumps out to me is that no front-runner has won the Belmont in a non-Triple Crown year during this 20-year span.

The average margin for these eight editions is a bit tighter at one length and 1 ¼ lengths behind after the first quarter- and half-mile, respectively, thanks in part to three front-running winners: Triple Crown victors Justify (2018) and American Pharoah (2015) and Da’ Tara (2008), who upset Big Brown after setting an uncontested pace as a 38.5-1 outsider.

Refocusing on only the 12 non-Triple Crown Belmont Stakes, nine of the 12 winners competed in at least one of the previous two Triple Crown races. Two of them, Aleet Alex (2005) and Point Given (2001), lost in the Kentucky Derby and won the Preakness before dominant performances in the Belmont Stakes. Note that War of Will fits this profile.

The other three — Ruler On Ice (2011), Drosselmeyer (2010), and Rags to Riches (2007) — did not compete in a Triple Crown race before winning the Belmont, although Rags to Riches was a dominant 4 ¼-length winner of the Kentucky Oaks. Ruler On Ice and Drosselmeyer entered off runner-up finishes in the Federico Tesio Stakes and Grade 2 Peter Pan Stakes, respectively. Belmont Stakes hopeful Sir Winston enters off a runner-up finish in the Peter Pan, while Intrepid Heart ran third in that race after a troubled start.

Two horses who look left out in the cold are Preakness runner-up Everfast and third-place finisher Owendale as none of the previous 20 Belmont winners missed the Derby, ran in the Preakness, and then won the Belmont Stakes.

Three of the 12 races were decided by a neck or less, five by a length or less, and eight by two lengths or less. The only two true blowouts were by the aforementioned Afleet Alex (seven lengths) and Point Given (12 ¼ lengths), who also happen to be the only two favorites to win in the last 12 non-Triple Crown editions of the Belmont Stakes.

For comparison purposes, average payout for Belmont Stakes in Triple Crown years since 1999 is actually much higher due to six failed bids by dual classic winners. Four times the winner was 29.75-1 or higher, topped by Sarava at 70.25-1 in 2002, for average win odds of 23.4-1.

We could be looking at a dominant performance from War of Will that allows him to join Afleet Alex and Point Given as Preakness-Belmont Stakes winners, but I’m also going to look very closely at all of the Derby runners who skipped the Belmont with Tacitus a serious win candidate while Tax could be interesting at what should be very appealing prices.