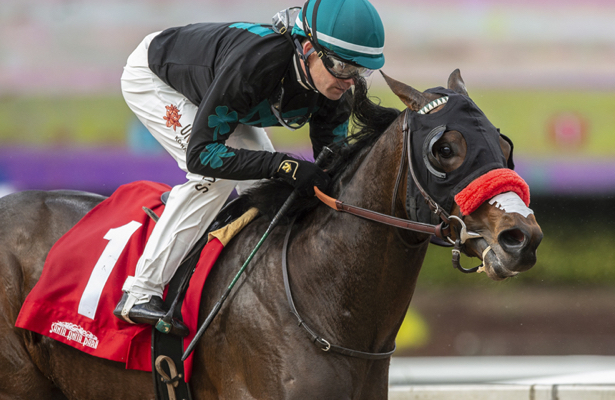 Breaking from the rail, the Doug O’Neill-trained Stubbins made every pole a winning one in Saturday’s $100,000 Pasadena Stakes at Santa Anita Park as he sped to an eight-length victory under Tyler Baze while getting a flat mile over a sloppy main track in 1:36.15.

Originally scheduled to be run at one mile on turf, the Pasadena was shifted to the main track due to significant rainfall.

“I’ve never ridden him before, but from watching tape of all four of his races, he seemed very ‘push button,’ said Baze, who filled in today for Rafael Bejarano, who is sidelined due to a tonsillectomy.  “It sure looked like he’s a horse that wants to go and I’m glad they didn’t change the game plan in the paddock.”

A game winner of his last two starts, both at 6 ½ furlongs down the hillside turf course, Stubbins, who was trying two turns for the first time, was off as the 9-5 second choice and paid $5.80, $3.60 and $3.40 while notching his first stakes win and his third victory in a row.

“When we ran him at Del Mar (finishing first and third in a pair of main track sprints on Aug. 4 and Aug. 26), we knew he was legit, but he had some issues with his shins, so we gave him the time off,” said Leandro Mora, assistant to O’Neill.  “He’s going up the ladder now, getting better and better with each race. This was huge today.”

Owned by McShane Racing, LLC, Stubbins, a 3-year-old colt by the Tiznow stallion Morning Line, out of Atraf mare Sierra Vista, now has three wins from five starts.  With the winner’s share of $60,000, he now has earnings of $146,400.

Neptune’s Storm, attentive to the pace throughout under Kent Desormeaux, was off at 7-2 and paid $4.20 and $3.20 while finishing a half length in front of Mayor Cobb.

Ridden by Mike Smith, Big Scott Daddy pressed the early pace, but weakened through the drive.