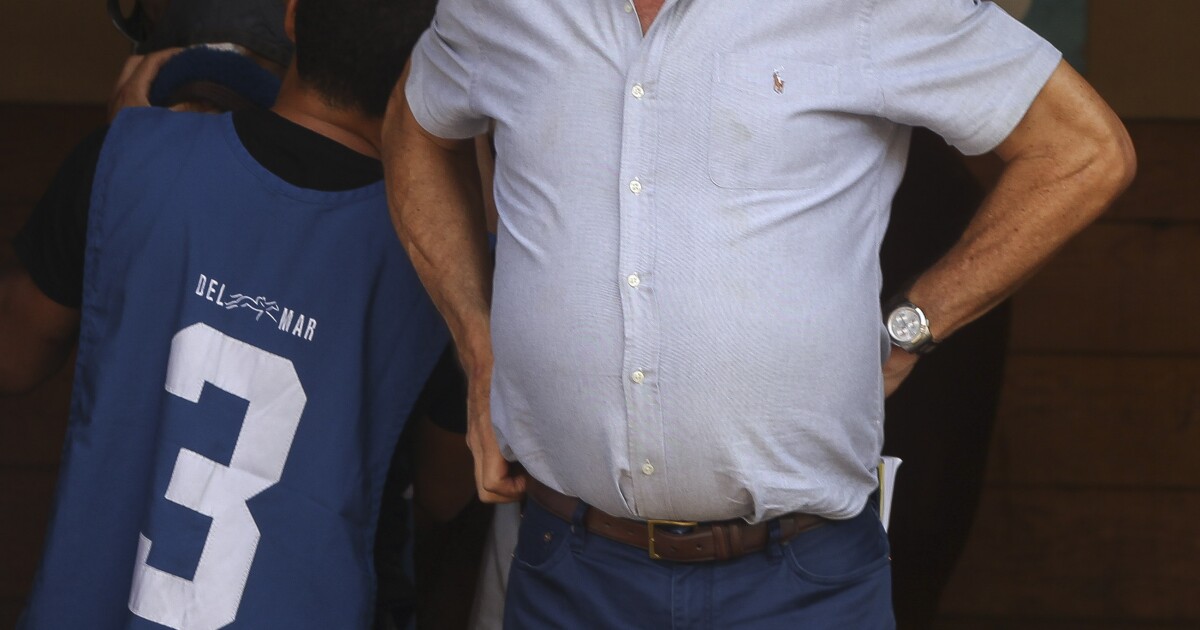 Hello, my name is John Cherwa and welcome back to our horse racing newsletter as we finish the first week of racing at Los Alamitos in what could be the last Fair meet in September.

If it’s Monday, it must mean stewards’ rulings. We’re doubling up and finishing the Del Mar meeting, although there may still be some that the Los Alamitos stewards have to adjudicate. So, with that introduction …

–Trainer John Sadler was fined $750 for not reporting in a timely way that Noble Pursuit had been gelded. The horse was scheduled to run on July 5 but was scratched by the stewards. Sadler pleaded no contest to the complaint.

–Jockey Ruben Fuentes was suspended five days (Aug. 28, 29, 30, 31 and Sept. 1) for failure to keep a straight course and interference for his ride aboard Spendaholic in the sixth race on Aug. 18. The stewards determined that Fuentes allowed Spendaholic to drift out and interfere with Jetovator. Spendaholic finished fourth and Jetovator was sixth. Steward Kim Sawyer thought the penalty should have been more severe. It was Fuentes second riding offense in the last 60 days.

–Owner Mike Nakhleh has been suspended for failure to appear at a hearing on Aug. 22 over a complaint that he owes $386.12 to the Southern California Equine Foundation. During the suspension he can’t show up at the track or any place controlled by the CHRB.

–Trainer Doug O’Neill was fined $200 for sending Strongconstitution to the receiving barn on Aug. 23 with the wrong kind of shoes. The horse had toe grabs for a race on the turf. Horseshoe inspector Victor Tovar was able to grind the shoes down and the horse won the race.

–Jockey Aaron Gryder was suspended three days (Aug. 31, Sept. 1 and 2) for altering course without sufficient clearance and interference for his ride aboard Y Not Sizzle in the fifth race on Aug. 23. The stewards determined that on the backstretch Y Not Sizzle shifted out from behind traffic and forced Si Mamacita to go out with him. It forced Alonso Quinonez, aboard Si Mamacita, to check off the heels of Too Hot For Curlin. Y Not Sizzle finished second, Too Hot For Curlin was fourth and Si Mamacita was eighth.

–Jockey Brice Blanc was fined $100 for using his riding crop more than three times without allowing his mount, Nothing But Heat, to respond during the fifth race on Aug. 23. Nothing But Heat won the race by a length.

–Exercise rider Frederic Buscail was fined $50 for galloping on the rail after a workout on Aug. 22. Buscail acknowledged he was galloping on the rail but said it was because he just finished working a difficult horse and was trying to ease him out. However, when confronted by the outriders, he offered a flippant response which, according to stewards, “while not abusive, did not help his cause.”

–Owner Saul Carrillo was restored to good standing after paying his past due bill to private veterinarian Dr. Nicola Hardgrove. The original ruling was on March 19 but because much of the CHRB website is not web compliant with the state of California, earlier rulings and minutes are not easy to obtain.

–Trainer T.R. Bell II was fined $200 for sending Brimstoned to the receiving barn with the wrong kind of shoes for the fourth race on Aug. 29. Brimstoned was wearing toe grabs on her hind shoes for a turf race. Horseshoe inspector Victor Tovar grinded the shoes down and Brimstoned finished second.

–Exercise rider Nicole (Nikki) Diodoro was fined $200 for disorderly conduct. Here’s an edited version of how the stewards’ minutes explained the Aug. 22 incident. “At approximately 5:15 a.m., Diodoro arrived at the East Stable Gate riding her bicycle at a high rate of speed and she passed the security gate without stopping to show her identification. Security Officer [Michael] Pascuzzi caught up to Diodoro near Barn A and he ordered her to show her CHRB identification. Diodoro refused and she became belligerent. Diodoro was eventually handcuffed and was taken to the Backside Security Office. At the security office, Diodoro told the security officers, ‘I don’t have to follow your instruction because you’re not cops, you are only security guards.’ Diodoro admitted to the security officers she smoked a controlled substance and consumed an alcoholic beverage prior to coming to work that morning. … Ms. Diodoro displayed some regret for her actions in the early morning hours of August 22. The San Diego County Sheriff’s department arrived on the scene on this morning and interviewed Ms. Diodoro. After an examination for intoxication that was negative, the sheriff’s officer let Ms. Diodoro remain at the track. Del Mar Security documented the incident memorialized above in a comprehensive seven (7) page ‘Security Incident Report.’”

–Groom Pedro V. Ledezma was fined $100 for disorderly conduct. According to the stewards, he was “found passed out in the vegetation on the corner of Jimmy Durante Blvd. and Via De La Valle. He was taken into custody by the San Diego County Sheriff’s office on that day.” The stewards said Ledezma would need to be evaluated and comply with recommendation of the Winner’s Foundation. Trainer Alfredo Marquez said he would employ Ledezma.

–Pony rider Amanda Roper was fined $200 for detrimental behavior in the post parade. It happened in the sixth race on Aug. 30, in which jockey Mike Smith was unseated from Drippin Sauce during the post parade of the I’m Smokin Stakes. Smith landed on his feet and the horse ran eighth and last in the race. A video review showed that Roper was “being rough with the horse,” according to the stewards’ minutes. Roper apologized and accepted responsibility for her actions.

–Jockey Norberto Arroyo Jr. had three judgments against him. He was fined $300 for driving a golf cart in a restricted are on Aug. 1. He drove the cart around 9:30 a.m. near the Y and Z barns. At 10:30 a.m., he drove the cart across the racetrack at the ¾ pole. And he drove a golf cart in the stable area after he was told his privilege was revoked. He was fined $200 for failure to identify himself to security officers on Aug. 4. It was a second offense. And, Arroyo Jr., was fined $300 for failure to report to the jockey’s room on time on Aug. 31. He signed in at 1:30 p.m. on that day, but he was not heard from until he called in from the First Aid room at 1:42 p.m. The stewards determined a 1:30 sign in was not possible. His agent, Mike Ciani, said he had no explanation for the allegations.

–Jockey agent Derek Lawson was fined $300 for failure to conduct business in a proper manner. Trainer Peter Miller said Lawson had agreed that jockey Flavien Prat would ride Convoluted in the Del Mar Juvenile Fillies Turf on Aug. 30. However, Prat was also named to ride Shedaresthedevil for trainer Simon Callaghan. Miller contended that left him scrambling to find a jockey. The stewards agreed. Shedaresthedevil finished fourth and Convoluted finished seventh.

On Sunday, we talked about how there really wasn’t a feature on Sunday, but we picked the second race, a $40,000 maiden special weight for 2-year-olds going a mile. The race scratched down to five when Bob Baffert trainee Ragtime Blues was a vet scratch.

But Baffert had another horse, Bronn, who had to battle down the stretch but eventually won by half-a-length. Bronn paid $2.80 and $2.10. There was no show wagering. Special Day was second followed by Wicked Blue, Zees Empire and Bean and the Bug. And speaking of bug, apprentice J.C. Diaz, Jr., was the winning jockey.

Always looking to add more subscribers to this newsletter. Can’t beat the price. If you like it, tell someone. If you don’t like it, then you’re probably not reading this. Either way, send to a friend and just have them click here and sign up. Remember, it’s free, and all we need is your email, nothing more.

Any thoughts, you can reach me at [email protected]. You can also feed my ego by following me on Twitter @jcherwa

Now, here’s the star of the show, Sunday’s results. See you on Friday.

BURN ME TWICE had speed inside to duel for the lead then inched away into the turn, battled inside leaving the turn, came off the rail into the stretch and fought back when headed in upper stretch to regain the advantage in midstretch, inched away again past the eighth pole and proved best under a couple left handed cracks of the whip and good handling. REIGN ON (GB) pressed the pace four wide then stalked into the turn, re-bid outside the winner leaving the turn, put a head in front in upper stretch, could not match that one in the final furlong but was clearly second best. SEATTLE ENCOUNTER stalked outside a rival, came three wide into the stretch and edged a rival late for the show. PAPA CABALLERO prompted the pace three deep between foes then stalked into the turn, was three wide midway on the bend, angled in outside a rival into the stretch and was edged for third. STEVEN DECATUR hopped at the start, saved ground stalking the pace throughout and weakened. SIR PAL dueled between horses then stalked between foes into the turn, dropped back between rivals on the bend and gave way.

BELLA RENELLA bobbled at the start, stalked outside then three deep into and on the turn and into the stretch, bid three wide under urging in the drive, gained a slim lead in late stretch and gamely prevailed. JODIE FASTER angled in and dueled outside a rival, had the leader slip away briefly in midstretch, re-bid between foes a furlong out and continued willingly. DORITA’S WILD CAT had good early speed and dueled inside, came a bit off the rail into the stretch, inched away briefly in midstretch, fought back inside the top pair but could not quite match those rivals late. MISS JOHNNIE saved ground stalking the pace, came a bit off the rail in deep stretch and lacked the needed rally. MUCHOMONEYBABY stalked the pace between foes, continued a bit off the rail leaving the turn and into the stretch and weakened.

ACCORDING TO BUDDY lunged and bobbled slightly at the start, stalked off the rail, came three wide into the stretch, drifted out a bit then in slightly from the whip past midstretch then rallied under a strong hand ride to gain the lead late and proved best. SHAKE N FRIES pressed the pace outside a rival then stalked into the turn, re-bid alongside that foe leaving the turn, took a short lead in the stretch, could not contain the winner late but held second. GOLDEN IMAGE had good early speed and dueled inside, inched away into the turn, fought back inside leaving the turn, came a bit off the rail into the stretch, drifted back to the inside and fought back in the final furlong but was edged for the place. BEA’S BOY chased off the rail, angled in approaching the turn, continued inside into the stretch then a bit off the fence in the final furlong and lacked a rally.