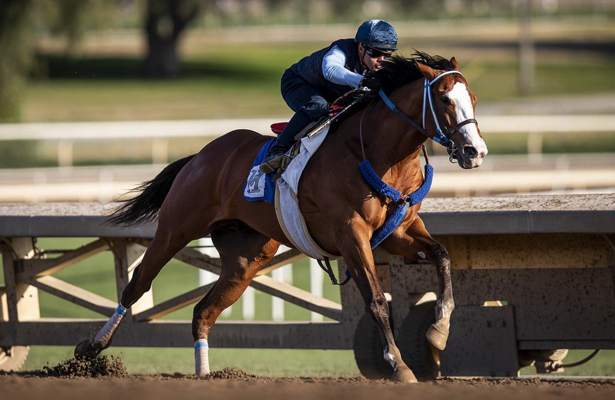 Instagrand, originally pointed to make his 3-year-old debut against the likes of Game Winner and Improbable in Santa Anita’s March 9 San Felipe Stakes (G2), will instead hit the 2019 Kentucky Derby trail that same afternoon in New York.

The Daily Racing Form’s David Grening reported Thursday that the son of Into Mischief has diverted to Aqueduct’s Grade 3, $300,000 Gotham Stakes, keeping Instagrand around one turn off a layoff spanning more than six months.

“After discussing with Larry the best possible path to take with our horse,” Hollendorfer told Grening, “it was suggested and determined that the Gotham would be a better race for him than the San Felipe.”

Instagrand has won his two career starts by a combined 20 1/4 lengths, first going in maiden special weight company June 29 at Los Alamitos before romping in Del Mar’s Best Pal (G2). The $1.2 million yearling purchase hasn’t been seen since in the afternoon, a source of curiosity on the Derby trail with the precocious colt talented but inexperienced.

Instagrand has tuned up for his return with a series of lengthy works. On Monday, he stretched to seven furlongs in 1:26.60 under jockey Javier Castellano, who traveled East to breeze his potential Derby mount for the first time.

The one-mile Gotham awards the same number of Derby qualifying points as the 1 1/16-mile San Felipe, paying out on a 50-20-10-5 basis to the Top 4 finishers.

Along with the San Felipe and Gotham, the Tampa Bay Derby (G2) and Jeff Ruby Steaks (G3) run March 9 on a massive day for the Derby trail.