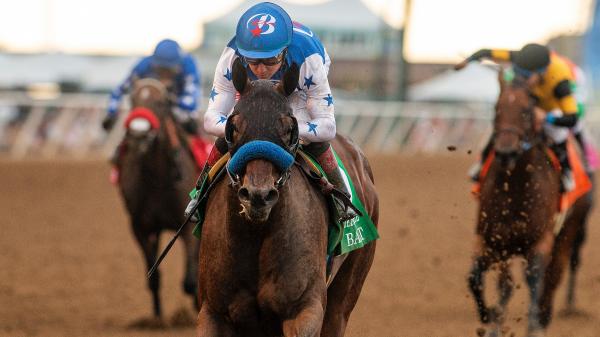 The path to the 2019 Breeders’ Cup World Championships at Santa Anita Park on Nov. 1-2 is a road with plenty of ups and downs as talented racehorses vie for a spot in one of 14 championship races.

This filly looked professional in winning the Grade 1 Del Mar Debutante Stakes in just her second start Aug. 31 after running second in her debut for Hall of Fame trainer Bob Baffert. She relaxed nicely off the pace under Drayden Van Dyke, made her move when given her cue and advanced four wide on the turn, then pulled away to win by 8 ¾ lengths. I really liked the way she targeted the leaders and swept past, while continuing to extend her lead to the finish. Baffert said she responded well to the addition of blinkers, which help improve focus. “She needed the blinkers the first time, but I wanted to get a race in her before the Debutante,” Baffert said. “She came back after that race and worked so well I knew she was ready to go.” Bast earned an 85 Beyer Speed Figure and a 100 Equibase Speed Figure, the latter a 16-point improvement from her debut. Baffert has won the Breeders’ Cup Juvenile Fillies twice with Silverbulletday (1998) and Indian Blessing (2007) and seven of his 15 wins at the Breeders’ Cup have been with 2-year-olds. By champion Uncle Mo out of an Arch mare (Laffina), who is a sibling to four stakes winners, Bast should be fine stretching out as the distances get longer up to the 1 1/16-mile Juvenile Fillies Nov. 1 at Santa Anita. “I had a ton of horse all the way. She broke good and when they all rushed up there, I just took a hold and sat back. She was focused today,” Van Dyke said. “She was cruising at the end. Very impressive.” Indeed.

Normally, I wouldn’t be especially keen on a racehorse who won his first stakes in August and first graded stakes Sept. 7 at Kentucky Downs when it comes to Breeders’ Cup World Championships evaluation, but I think the Turf Sprint is much more about current form than class. When it comes to current form, Totally Boss is as good as ever after winning for the fourth time in five starts in 2019 when he surged clear to win the Grade 3 Runhappy Turf Sprint Stakes by 1 ¼ lengths Saturday. His only loss of the year was a runner-up finish by a nose in June at Churchill Downs to multiple graded stakes winner Om, runner-up in the 2016 Turf Sprint. Totally Boss won the Kentucky Downs Preview Turf Sprint by a half-length in course-record time at Ellis Park on Aug. 4 to earn a 114 Equibase Speed Figure. He improved that by a point to a 115 in the Runhappy Turf Sprint. That should set him up nicely to take a step forward in his next race given sufficient rest, which would put him well within striking range, historically, in the Turf Sprint. Over the last 10 years, the Turf Sprint winner ran between a 102 and 124 Equibase Speed Figure with an average of 115.8 and a median of 116. The 6 ½-furlong downhill turf course at Santa Anita would have added an extra variable; however, the news that it has been shifted to the main turf course and cut back to five furlongs figures to help Totally Boss. He’s versatile enough to stalk or close depending upon pace and should be considered a serious player.

Even though she lost as the even-money favorite in the Grade 2 Yellow Ribbon Handicap in August, it was hard to be too critical after a third-place finish by a half-length in which her four-race winning streak was halted. She regained her winning form Aug. 31 at Del Mar in the Grade 2 John C. Mabee Stakes by closing like a freight train to collar Juliet Foxtrot in the final strides and prevail by a nose. Vasilika has now won 15 of her last 18 races overall. Her three losses during that span are by a neck, a half-length, and two lengths. She has won her last 10 starts on the grass at Santa Anita Park, where she looks like a safe bet to be finishing powerfully and to post an Equibase Speed Figure between 111 and 116. The average winning Equibase Speed Figure for the Maker’s Mark Breeders’ Cup Filly and Mare Turf over the last 10 years is 116.3 with a median of 116.5. I think Vasilika is very capable of that type of effort, which would make her a top contender and arguably one of the most logical runners to finish in the top three. Hall of Fame trainer Jerry Hollendorfer has won three Breeders’ Cup races, and jockey Flavien Prat has two Breeders’ Cup wins and six additional top three finishes from 24 starters in the World Championships. Right now, Sistercharlie looks like the heavy favorite to repeat in the Filly and Mare Turf, but she’ll need to beat Vasilika on her home turf to do it.

Also-Eligibles: Royal Charlotte was very impressive when rallying to defeat previously unbeaten Break Even by 1 ½ lengths in the Grade 2 Prioress Stakes Aug. 31 at Saratoga for her fifth win in six career starts (all in 2019). If you draw a line through an uncharacteristically bad race in the Grade 1 Longines Test Stakes, Royal Charlotte has posted an Equibase Speed Figure between 95 and 99 in each of her five other races. She’s consistent but she needs to run faster to be a serious threat in the Breeders’ Cup Filly and Mare Sprint. … Mrs. Sippy is one to keep an eye on after she won the Grade 2 Glens Falls Stakes Aug. 31 in her U.S. debut for trainer Graham Motion. A stakes winner in France, the 4-year-old Blame filly completed her final three-eighths on a mile in 34.66 seconds to win by three-quarters of a length and the speed figures were solid: 110 Equibase Speed Figure, a 96 Beyer Speed Figure, and a 119 TimeForm US rating. … Preservationist bounced back nicely from a fourth-place finish in the Whitney Stakes to win the Grade 1 Woodward Stakes Presented by NYRA Bets by a half-length Aug. 31. He earned a 125 TimeForm US rating, a 106 Beyer Speed Figure, and a 110 Equibase Speed Figure, the latter just a point off his career top for two-time Breeders’ Cup-winning trainer Jimmy Jerkens. … Perfect Alibi followed up a game win in the Grade 2 Adirondack Stakes with another display of tenacity in winning the Grade 1 Spinaway Stakes Sept. 1 at Saratoga, where she fought gamely on the inside and was in tight several times before pulling away late. She seems to have a great mind but the speed figures indicate she might not be fast enough, yet, to be a top contender for the Juvenile Fillies. … Zulu Alpha has proved capable of running huge races on occasion as he did in winning the Grade 3 Calumet Farm Kentucky Turf Cup Stakes Sept. 7. The 117 Equibase Speed Figure matched a career best and I think the 1 ½ miles of the Longines Breeders’ Cup Turf is his best distance.

It pains me to place this 6-year-old by Smart Strike here, because he’s a personal favorite, but I keep on believing he’ll get a breakthrough graded stakes win and keep getting burned. I still believe it will happen for Tom’s d’Etat, but after he faded to fourth in the Grade 1 Woodward Stakes Presented by NYRA Bets in a race that appeared to set up ideally for him, it’s fair to question if he’s capable of taking the next step. He had been handled very carefully – Tom’s d’Etat won four allowance races and a stakes before making his graded stakes debut – prior to finishing ninth in the Grade 1 Pegasus World Cup Invitational Stakes in January. Since then he’s run second and then third in Grade 2 races, won the Alydar Stakes at Saratoga, and finished fourth in the Woodward. Tom’s d’Etat just seems to come up a little bit short when asked to take that next step.

The two-time defending Breeders’ Cup Turf Sprint winner is now winless in five starts after a fifth-place finish in the Grade 3 Runhappy Turf Sprint Stakes Sept. 7 at Kentucky Downs. While he has faced elite competition and run several solid races, he’s been beaten by open lengths in each of his four group or graded stakes starts this year. I didn’t like the Runhappy Turf Sprint Stakes for him entering the race, but it actually set up fairly well for him with speed holding up well at Kentucky Downs and Stormy Liberal being a sprinter with terrific tactical speed. Unfortunately, he was no match for winner Totally Boss, finishing three lengths back. Stormy Liberal just has not had the same late burst as a 7-year-old as he showed in the previous two seasons. One reason for optimism: this year’s Breeders’ Cup host track, Santa Anita Park. Stormy Liberal has six wins and five seconds on the turf at Santa Anita since 2016, so if he’s going to find his top form it would seem like a logical spot for that to happen. Of course, all of those races came on the downhill turf course at Santa Anita, so no horse was hurt worse than Stormy Liberal by the shift of the Turf Sprint from the downhill course to five furlongs on the main turf course.

I try not to be too hard on 2-year-olds, especially ones challenged with a new variable as By Your Side was when racing on a wet track for the first time in the Grade 1 Runhappy Hopeful Stakes Sept. 2 at Saratoga. He made little to no impression in the seven-furlong race on a sloppy track, finishing fifth and beaten by 9 ½ lengths. Based upon pedigree, the Grade 3 Sanford Stakes winner should have no problem stretching out in distance and he was very good in his first two starts, so I’ll chalk this one up to the sloppy track and look for him to rebound in his next race.