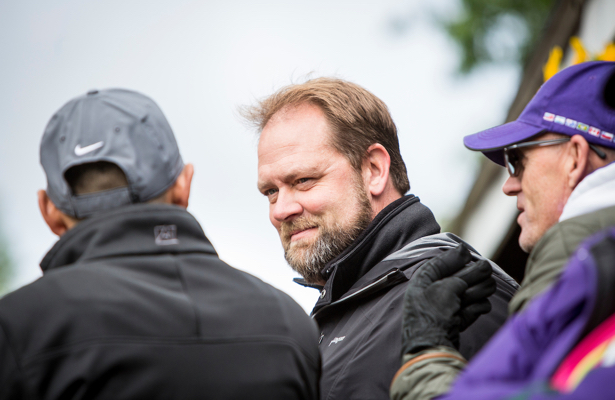 Sold It, a gray daughter of multiple Grade 1 winner The Factor, is ticketed for this Sunday’s Grade 2 Santa Ynez Stakes for 3-year-old fillies at seven furlongs — also a points-paying prep toward the Kentucky Oaks.

Sold It broke her maiden in a turf sprint at Del Mar on Nov. 15, then weakened to fifth after prompting the pace going 1 1/16 miles in the Grade I Starlet won by Chasing Yesterday at Los Alamitos on Dec. 8.

“I thought she ran really well in the Starlet,” said Doug O’Neill, who trains the Kentucky-bred for Ciaran Dunne and Reddam Racing LLC.

“She’s doing great, and we’re backing her up to seven eighths because that’s what’s on the calendar, so we’ll either lead her over for the Santa Ynez or continue to work her, but I think her best races will be at two turns.”

The Factor was a front-running gray son of War Front who captured the Grade 1 Malibu and the Grade 1 Pat O’Brien in 2011 when trained by Bob Baffert. Overall, the Kentucky-bred won six of 13 starts and earned $922,180.

Baffert has Mother Mother and Qahira nominated to the Santa Ynez, but is likely to enter only the former, who was third by a neck to stablemate Chasing Yesterday in the Starlet after setting the pace under Florent Geroux.

A daughter of the Baffert trained Pioneerof the Nile, Mother Mother won the restricted Rags to Riches going a flat mile at Churchill Downs on Oct. 28.

They’ll all be out to beat the likely favorite Bellafina, a multiple Grade 1 winner running back from a fourth-place finish in the Breeders’ Cup Juvenile Fillies.

SAN GABRIEL COULD BE STEPPINGSTONE FOR D’AMATO DUO

Canadian invader Cleopatra’s Strike and horse for course Hunt could represent trainer Phil D’Amato in this Saturday’s Grade 2 San Gabriel Stakes for 4-year-olds and up at 1 1/8 miles on turf.

“We’re looking at this race as a possible stepping stone for both horses,” D’Amato said. “We’ll try to get a line on them for 2019.”

Cleopatra’s Strike is a 6-year-old gelded son of Smart Strike who has made 18 of his 22 career starts at Woodbine. The chestnut bred in Ontario has never run in a stakes race.

The Irish-bred Hunt, on the other hand, has run in 14 straight stakes and in 16 stakes from 22 starts overall in America. A 7-year-old Dark Angel gelding, Hunt has won five of 11 starts on Santa Anita’s turf course, including the Grade I Shoemaker Mile May 28 of this year.

FINISH LINES: Much Better, an impressive debut winner as the 9-10 favorite at Del Mar Sept. 1 for Bob Baffert, worked five furlongs Monday in company for a possible start in this Saturday’s Grade 3 Sham Stakes. The son of Pioneerof the Nile was timed in 1:00.40 with Drayden Van Dyke aboard. In all, there were 185 recorded workouts Monday, 31 on the training track.