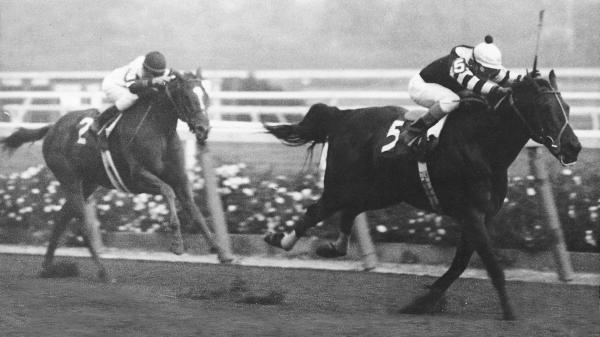 That is how eloquently trainer Billy Turner spoke when he described Seattle Slew during a 2013 interview. Even in allowing the imagination to run wild, it would be hard to conceive of a tale as magnificent as that of Seattle Slew, the only horse to win the Triple Crown while undefeated.

Karen and Mickey Taylor and their partners, Sally and Jim Hill and Glenn Rasmussen, had modest aspirations when they stretched their budget to purchase the son of Bold Reasoning for the relatively paltry sum of $17,500 as a yearling. He was big for his age and, because he still needed to grow into his body, his clumsiness led him to be dubbed “Baby Huey” around the barn.

Turner helped his wife, Paula, break Seattle Slew at Middleburg Training Center in Virginia. It was there that they began to suspect they were dealing with something special.

“He learned things quickly and he had a quiet confidence. It never seemed like he wasn’t in charge of everything,” Turner said. “You don’t see that in yearlings very often.”

The trainer soon began to think the still-maturing youngster was almost too fast for his own good. When he breezed him for the first time — in March, 1976 at Belmont Park – he had unusual instructions for exercise rider Tommy Pascuma. Turner remembers telling Pascuma, “Listen, this horse is not really awake yet. If he does wake up and get to running, just pull him up.”

Seattle Slew breezed in the company of Clova, an older filly Turner was bringing back from a layoff. “After an eighth of a mile, Slew looked over and saw something running with him and just took off,” Turner recalled. Pascuma struggled to pull up the 2-year-old.

The reason for Turner’s instruction was simple. “He wasn’t mature enough to go as fast as he was going to go without hurting himself,” he explained.

Seattle Slew did not debut until late September of 1976. After delighting everyone with his “war dance” – he would tiptoe onto the track before races – he showed how ready he was for battle with a five-length romp. An easy allowance score preceded a 9 3/4-length tour de force in the Champagne Stakes that brought him year-end honors as the top 2-year-old.

The start to his 3-year-old season was as memorable as his finale from the year before. On March 9, 1977, he set the track record for seven furlongs at Hialeah Park. Solid victories in the Flamingo Stakes and Wood Memorial led him to enter the Kentucky Derby starting gate as a huge 1-2 favorite. He did not disappoint, recovering from a poor start to pull away from Run Dusty Run by 1 3/4 lengths. He withstood early pressure from Cormorant in the Preakness to best Iron Constitution by 1 1/2 lengths, setting the state for the mile-and-a-half Belmont.

The last leg was the one Turner feared most. He and everyone else wondered how jockey Jean Cruguet could possibly harness the speed of the nearly-black colt through so many furlongs. It turned out that Seattle Slew had saved the best for last, dominating the Belmont by four lengths to extend his perfection to 9 for 9.

In truth, what had been a storybook run took some unpleasant turns after that. While Turner wanted to give the 3-year-old some time off after the Triple Crown grind, ownership pressed on by insisting on running him in the Swaps Stakes at Hollywood Park in Inglewood, Calif. It was one race too many. He was no better than a weary fourth, 16 lengths behind J.O. Tobin.

Turner, who admitted to a drinking problem, would be replaced by Doug Peterson. Cruguet stepped aside for Angel Cordero Jr. After nearly dying from a severe viral infection early in his 4-year-old campaign, Seattle Slew rebounded to turn back 1978 Triple Crown winner Affirmed in the Marlboro Cup and the Jockey Club Gold Cup.

In all, Seattle Slew rattled off victories in 14 of 17 starts for earnings of $1,208,726. After a successful stallion career, he died in his sleep at age 28. He closed his eyes for good 25 years to the day after he won the Kentucky Derby.