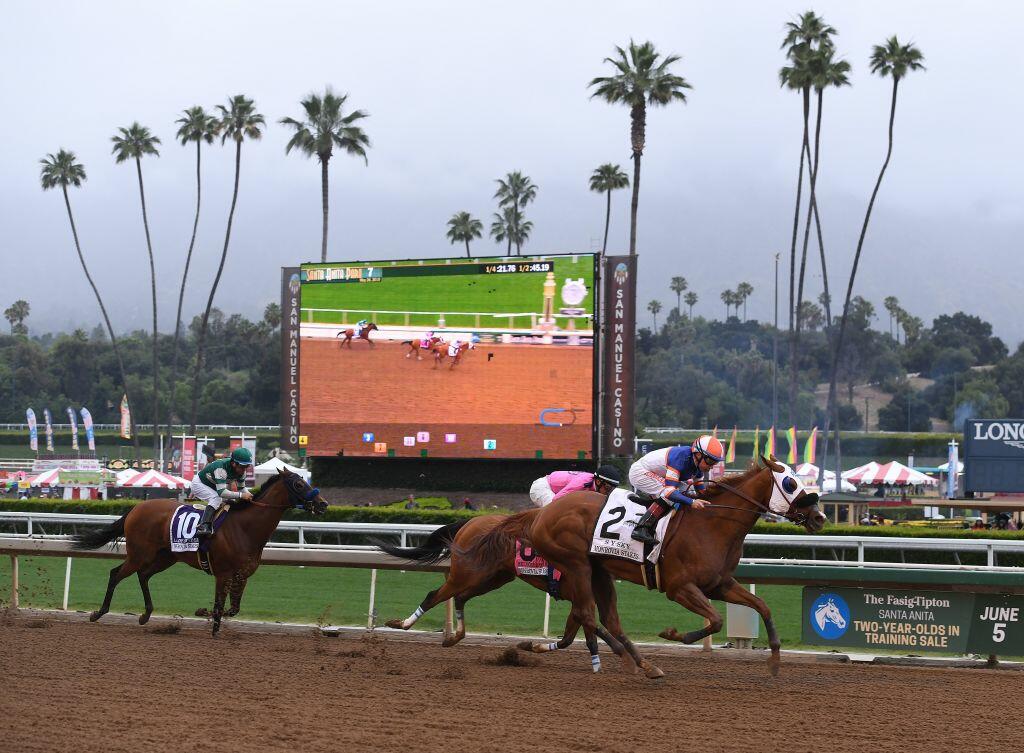 ARCADIA (CNS) – California Sen. Dianne Feinstein today called for a moratorium on horse racing at Santa Anita Race Track, a day after a third horse died at the racetrack in the past 10 days.

“How many more horses must die before concrete steps are taken to address what is clearly an acute problem,” Feinstein said. “I once again call for an immediate moratorium on racing at Santa Anita. We need a thorough investigation of practices and conditions at the track before any more races are held.

“I believe we need to carefully review what medications horses are given and under what circumstances as well as take a close look at the issues of overrunning horses, which may be contributing to deaths,” Feinstein added.

Several opposition groups held a joint demonstration outside the famed Arcadia track today before scheduled races, calling for a ballot measure or legislation that would prohibit the sport statewide.

Santa Anita officials said they have no plans to suspend racing and insisted that their track is safe, pointing to recent reforms at the track and emphasizing that no horses died there for seven weeks of racing prior to the three recent deaths.

“The track is safe, let’s be very clear right up front,” Stefan Friedman, a spokesman for The Stronach Group, which owns Santa Anita, told KTLA 5. “Until last week, you had seven weeks of racing without a single catastrophic injury. That is an incredible statistic that has been unseen in a very long time.

“The reforms that we’re putting into place here are nothing short of historic. We have to see how they work, and they are working, by and large. We’re talking about medication reform, we’re talking about technological reform and people who are not following the rules here are not going to be welcome here,” Friedman said.

On Sunday, a 9-year-old gelding named Kochees was put down after suffering a leg injury during a race the previous day. Kochees was the 26th horse to die at Santa Anita since the track’s racing season opened on Dec. 26. Mike Willman, Santa Anita’s director of publicity, said “every effort was made to save the animal.”

“I want someone to take charge of this and say, let the voters decide,” Heather Wilson, an organizer with Horseracing Wrongs — a New York- based nonprofit working to eradicate horse racing in the United States — told City News Service.

Wilson said her group and other activists would like to get an initiative on California’s ballot, but doing so “costs millions,” which can be cost-prohibitive for groups comprising mostly volunteers. She would be just as happy to see one or more state lawmakers take up the issue and push a law through the Legislature.

“We are not just standing out here holding signs yelling at people in the pouring rain, we are also looking at top-down tactics, changing the law,” Wilson said. “We’re hitting every angle that we can.”

She stressed that her group and the others demonstrating Monday have no involvement with People for the Ethical Treatment of Animals, which is working to reform — not ban — horse racing.

“They’re doing their own thing,” she said.

“Santa Anita and all California tracks must suspend racing until the ongoing investigation by the district attorney is complete and the new rules have been strengthened. Decreasing the number of broken bones is not enough. PETA and Social Compassion in Legislation are currently working with The Stronach Group and the California Horse Racing Board to enact new regulations and laws to stop all deaths. Nothing short of a zero-fatality rate is acceptable.”

Los Angeles County District Attorney Jackie Lacey has announced the creation of a task force to investigate the deaths of the horses at the track. And in a letter to the California Horse Racing Board on April 2, California Sen. Dianne Feinstein called for racing to be suspended at the track “until the cause or causes of these deaths can be fully investigated.”

“The Board regrets the loss of any horse,” the board said. “We are committed to working with the entire California horse racing industry in the protection of horses and riders. Information regarding safety initiatives currently in place, including those recently implemented at Santa Anita, is available on the CHRB website.”