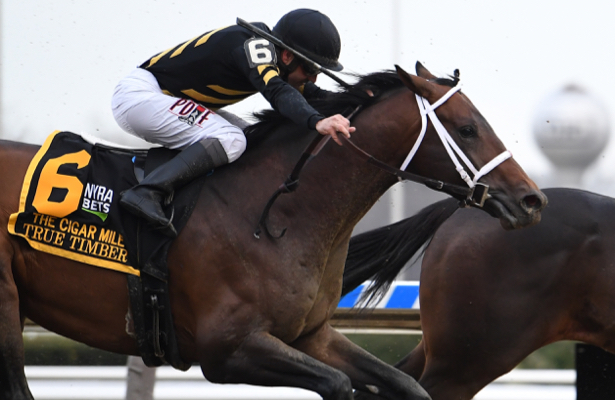 True Timber, who competed on last year’s Kentucky Derby trail before returning sprint distances, may continue stretching back out in the Pegasus World Cup.

“It’s just a possibility,” McLaughlin said. “I’m not sure if he would even get in if he pointed that way.”

For now, “We will point that way,” McLaughlin said.

The field will be limited to 12 runners, with slots available now for purchase. The Stronach Group, which hosts the race, has not revealed how many slots remain open.

True Timber came off a layoff Sept. 16 to win his allowance optional claiming return going six furlongs at Belmont Park. From there, he finished second in the Bold Ruler Handicap (G3) before running second by 3/4 of a length to Patternrecognition — another potential Pegasus runner — in the Cigar Mile.

“He ran a huge race the other day stretching out to a mile, and he galloped out real well,” McLaughlin said. “The thought process is, maybe a mile and eighth or more is OK.”

As far as McLaughlin’s other stakes runners, Enticed, who was last seen in the 2018 Kentucky Derby, “is just getting started” with a three-furlong breeze Saturday at the Palm Meadows Training Center in Florida. The trainer said Avery Island, last year’s Withers Stakes (G3) hero, is due to return to him “soon” after injury knocked the Street Sense colt off the Derby trail.

McLaughlin said he hasn’t sent a horse postward yet from the current 2-year-old crop he believes is Derby material going into next year but said “hopefully someone else will” prove capable from his barn in the coming months.