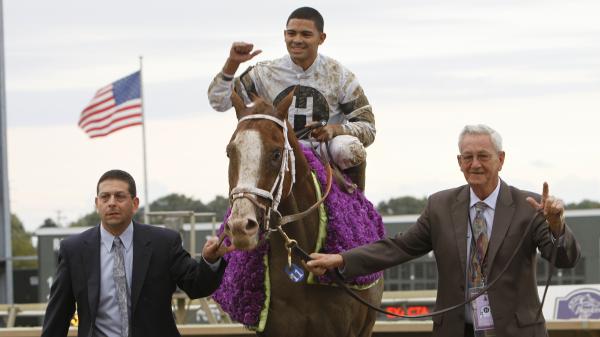 Tom Pedulla is interviewing prominent owners, trainers, and jockeys for America’s Best Racing as they travel the Road to the Kentucky Derby Presented by Woodford Reserve on Saturday, May 4, at Churchill Downs.

In the latest installment, he speaks to Willis Horton, who has been involved in racing as an owner for more than half a century. Horton, 79, bred and owns Long Range Toddy, who ranks 14th on the Kentucky Derby Leaderboard with 16 points.

The son of Take Charge Indy, out of the Unbridled’s Song mare Pleasant Song, could secure a place in the run for the roses with a strong performance in the Rebel Stakes on Saturday at Oaklawn Park. The 1 1/16-mile prep race awards points to the top four finishers on a 50-20-10-5 scale.

Long Range Toddy closed his juvenile season with three consecutive victories, capped by a win in the Remington Springboard Mile at Remington Park. He acquitted himself well in the first two prep races at Oaklawn, taking second in the $150,000 Smarty Jones Stakes and third in the $500,000 Southwest Stakes for Hall of Fame trainer Steve Asmussen.

PEDULLA: What has been your greatest moment in racing?

HORTON: Oh, I guess it would be with Will Take Charge and Take Charge Brandi. They both won Eclipse Awards.

PEDULLA: What major victories have you had?

HORTON: I won the Kentucky Oaks with Lemons Forever (2006). She turned out to be a real good broodmare. Take Charge Brandi won the Breeders’ Cup Juvenile Fillies (2014). I’ve had pretty decent luck.

PEDULLA: What led you to get involved with the sport?

HORTON: I always just loved horses, to start with. I never played golf or anything like that. My wife (Glenda) likes horses and we both enjoy going to the races.

PEDULLA: What do you think of Long Range Toddy?

HORTON: He’s been a good one so far. I raised him and that means so much.

PEDULLA: Does it add a lot knowing you bred the horse?

HORTON: Oh, yes. We owned the mare and bred her and to be able to come out with a horse this good is pretty special.

PEDULLA: Long Range Toddy had a good 2-year-old season. Is he better at 3?

HORTON: He’s moved up. In every race, he gets a little better. He’s filled out. He’s a big horse. I’m looking for a big run in him Saturday.

PEDULLA: How extensive is your breeding operation?

HORTON: It’s not very much. I usually have about three mares. I’m really not in the breeding business. I’d rather be in the racing business.

PEDULLA: Do you think Long Range Toddy will cover a distance?

PEDULLA: Do you think Long Range Toddy will earn enough points to qualify for the Derby?

HORTON: Yes, I certainly feel that way. We’ll know more about it Saturday.

PEDULLA: Can you discuss the role Steve Asmussen has played in the horse’s development?

HORTON: Steve is one of the professionals in this training business. He is a hands-on trainer and that’s what I like about him.

PEDULLA: What would it mean to you if this horse could win the Kentucky Derby?