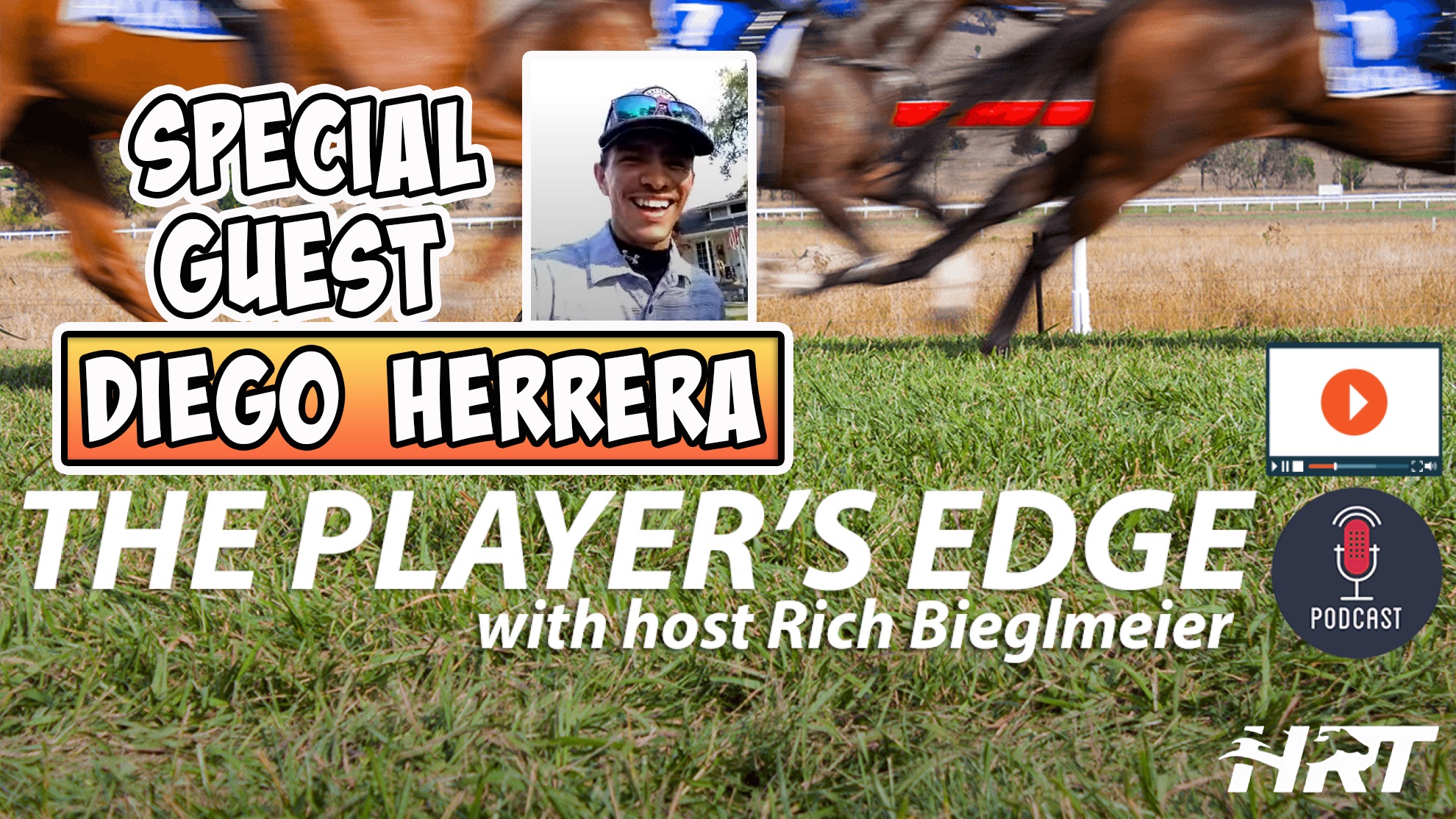 Southern California riding sensation, jockey Diego Herrera is this week’s The Player’s Edge guest. The impressive young man joins the show to talk about Santa Anita racing and share his thoughts on three stakes races, including:

6 –     Hail Freedom has finished in the money in ten out of eleven turf races, winning two. He is very versatile as he can run on top or come from off the pace to win and jockey Mike Smith should be able to see which way to ride him once the race starts. He has shown in the past that the distance will not be a problem.

2 –     Jimmy Blue Jeans ran in the G3 San Francisco Mile at Golden Gate Fields on the turf and led the race for 6-furlongs and then ran out of gas after setting fast fractions. He drops in class, and which will able him to compete with these horses, does not require the lead, and could be just off the pace which will be contested by the front-runners in the inside and outside posts.

5 –     Carmelita’s Man showed a lot of improvement in his last race and has a good workout on 21May SA 4f ft :48 H 5/75. He is a deep closer who has the highest speed figure at today’s distance, and has high % winning jockey Juan Hernandez and a trainer whose entries win 50% of the Non-Graded Stakes he enters horse in.

4 –     Irish Heatwave is in solid form; He ran last of five in this race last year but was only 4-1/2 lengths back of the winner and the good news is he’s been in good form since then.  He has tactical speed and the versatility to get a good stalking trip. Four of his six wins have come at Santa Anita and at today’s distance.

4 –     Tigre Di Slugo has been off a year and in his first race closed to finish 2nd to Brickyard Ride in the G3 Kona Gold receiving his highest speed rating of his career. He drops from the G3 ranks to state-bred company, has a high % winning trainer and his best dirt speed is fastest among today’s starters. Reviewing the numbers, puts him as the fastest in the field. The field has just five entrants, but it has enough speed to make his closing style work in the race.

5 –     Good With People was eased in a turf sprint at DMR last Aug 13 and has had a 9 month break since. He stays at the same class level for his return, and moves back to dirt, his preferred footing and has been working well for his return.

1 –     Moose Mitchell competed on the turf in his last race finishing a disappointing 10th after being bumped and having trouble during the race but should improve while returning to dirt. The rail post is winning at 19% clip, he has a high % winning trainer, a jockey who in the last 7 days has won three out of six starts and a good 5F workout on 22May @ SA 1:00.2 H 3/44.

1 –     Royal ‘n Rando comes in from Northern California after closing to win a one-mile race on the turf and stretches out to one and one-eight-miles which I think he can handle. He has his normal jockey veteran Frank Alvarado in the irons who knows just how to ride him and a good workout on 22May GG 5f ft 1:00.2 H 7/51.

6 –     Smuggler’s Run is stretching out to two turns for the first time but he is the class of the race with a proven turf form and is the speed of the race. He can either lead the race or come from off the pace and I believe he will try to go all the way on the lead.

3 –     Vincero Grande is also coming from Northern California to test the Southern California entries. She ran second in a one-mile race on the turf and has improved her speed rating in each of the last three races. She is almost always in the mix finishing in the money in five out of six career starts, winning two of the races.

4 –     Bally’s Charm won his last race at Santa Anita, has the highest last race speed rating (tie), his best turf speed is fastest among today’s starters and trainer in the last 14 days has won two out of four races.

#6 Hail Freedom– Has speed to have a good spot and I love the fact that Mike Smith has options with the outside post in a six horse field. The most consistent horse in the field finishing in the trifecta in 10 of 11 starts on the turf.

#5 Carmelita’s Man– Has the best late pace in the field. With all the speed in this race will be flying late and could get there.  Has finished in the exacta in 5 of 8 races at this distance.

#4 Irish Heatwave– Another that will benefit from the projected quick pace.  Rider switch to Joe Bravo could be huge for this horse.

PACE PROJECTION: A short field but quite a bit of pace with the #1 Moose Mitchell, #3 Fashionably Fast, and #5 Good With People all have speed to go for the early lead.

#5 Good With People– Gets the outside post and the speed inside of him.  Has had off for over 9 months since being pulled up and walked off in a turf race. Has been working out well and was very consistent before that race. 2 for 2 at this distance.

#2 Desmond Doss–  Has been off for over 7 months but really likes Santa Anita and the dirt. Has finished in the exacta in all 4 Santa Anita dirt races.  Will be coming late and could get a good set up with the pace ahead.

#4 Tigre Di Slugo–  2nd start after a year layoff. Drops in class as he was coming out of a Grade three race where he finished 2nd.  Likes Santa Anita and really likes the distance winning 2 of 3 with a 2nd.

#6 Smuggler’s Run– Has finished in the exacta in 4 of 5 career starts. Stretches out for the first time so probably will be closer to the pace which is good here as there is only one other speed horse in here.

#4 Bally’s Charm– Could be the early pace setter and get an easy lead. Speed number has improved every race. The same jockey Jessica Pyfer has ridden him in all his starts.

#1 Royal ‘n Rando– Should close and get a piece, and has had a very good 3 year old campaign compared to his 2 year old year.

Has sat close to the pace or comes off it

2 wins at distance with 8 starts

Trainers record in non-grade stakes is impressive, 12 starts 6 winners and 75% in the money over the past 2 seasons

Right spot for a win with the speed up front

Better effort race before in OC62.5k with front running win, she was rated in this race and much better results

If rated, he has a chance to run in the money, if pushed, he could be last

9 starts at a maiden but runs in the money

Race before, not sure what happened in OC62.5k race running an even 4th

He’s only real stinker was on the turf

Toss last, turf (again) with the excepted results of speed out done, 1 third on the turf not his thing

Coming in off a layoff with strong works over the track, the 1:12.4H sticks out

Has had good results vs state-breds in the past, if ready should run in the money

Toss last on the turf, off slow and blinkers back on after 4 races without.

Turf races have also been good, with 1 win 1 second and 1 vs open company in the worst race of his career vs stakes and had problems

Why play? Looking at his dam, she was a very useful type in her racing in allowance company on the turf running 2 turns races.

Sire side, he only ran 4 races all as a 2-year-old and placed in 2 grade 1 races and all of his races were around 2 turns

Since running her at 2 turns, she done really well