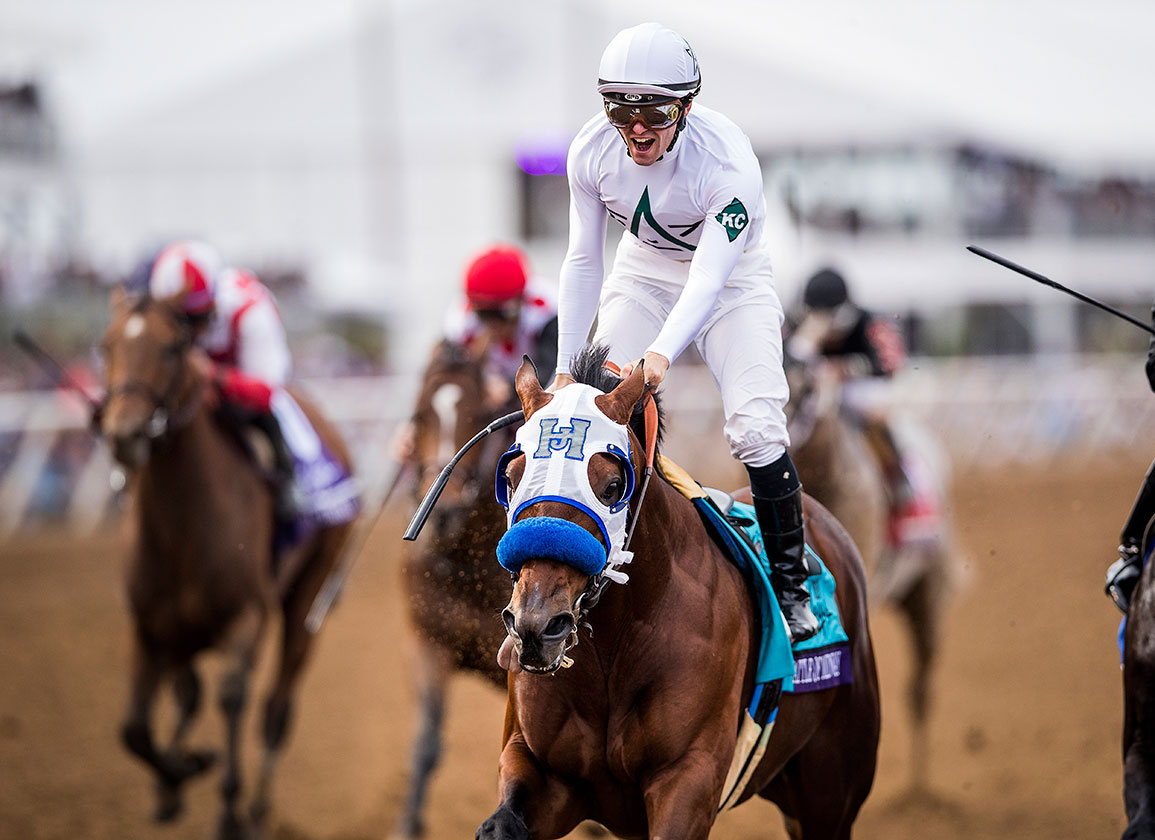 It’s universally understood that horse racing is a roller coaster. You’re on top, you’re on the bottom, you’re back on top, again, and things never do travel in a straight line. But perhaps no trainer has experienced such a wild swing of fortune within such a short period of time as Jerry Hollendorfer did Saturday.

Battle of Midway (Smart Strike) broke down during a morning workout Saturday at Santa Anita and had to be euthanized. It’s a terrible thing when any horse breaks down, but all the more worse when it’s a horse of Battle of Midway’s stature.

He won the 2017 GI Breeders’ Cup Dirt Mile and finished third in the GI Kentucky Derby in career that also saw him capture the GIII Affirmed S. He was retired to stud at the end of 2017, but had fertility problems and was returned to Hollendorfer’s barn.

He to action late last summer and launched a six-race campaign that included three wins, most notably the GIII Native Diver S. and a hard-fought score over the highly regarded McKinzie (Street Sense) in the GII San Pasqual S. Feb. 2. He was preparing for the Dubai World Cup, where he certainly would have been among the favorites.

Hollendorfer has been around a long time, which means he’s been through this before. It happens to all trainers. It’s not that he’s become hardened or used to horses breaking down; he’s realized the only way to stay sane in this sport is to always try to keep an even keel.

“Nobody says much here. We’re kind of a quiet barn,” he said Sunday morning. “But the feeling was there and it was recognizable. We deal with it the best we can. When a terrible thing happens, there’s nothing you can do about it. You can continue to dwell on it or you go ahead and try to do your very best. We chose to keep going. We’re not quitters.”

Maybe that’s because you know the next highlight, the next joyride, is right around the corner.

Back in February of 2018, Hollendorfer claimed a then 4-year-old filly named Vasilika (Skipshot) for $40,000. There was nothing remarkable about her career up to that point. She was a solid upper-level turf claimer, but had never run in a stakes race.

Twenty-one days later, she made her debut for Hollendorfer and finished second, but it was an improved effort and a sign of things to come. She won her next eight starts, including the GI Rodeo Drive S. The streak ended when she was fourth in the GI Matriarch S. Dec. 2, but she rebounded to win the GIII Megahertz S. Jan. 21.

She was favored in Saturday’s GII Buena Vista S., and even though there was a pall cast over Hollendorfer’s barn, he and his team knew this was no time to get swallowed up in their sorrow. Vasilika did what she usually does. She won by 1 1/2 lengths. Since the claim, she is 10 for 12 with five graded stakes wins. It’s not too early to project that she is Eclipse Award material.

“The whole barn was down because of what happened with Battle of Midway,” Hollendorfersaid. “So it made up for it a little bit, but it doesn’t erase the big blow of losing Battle of Midway. It certainly helped. Any time something negative happens, anything that comes along that is positive always helps. We know these horses get hurt and sometimes have to be euthanized. It’s just a part of what we do, but it doesn’t make it any easier that we know that.”

Hollendorfer is among the last people who would brag about what has been a terrific accomplishment, his handling of Vasilika. Again, it’s about never letting yourself get too high or too low.

“It was a real good claim,” he said. “I can’t remember all the good claims we’ve made but certainly she would be among the best. We try to keep a low profile in my barn. If we do something well, we accept that, and if something goes wrong, we accept that also. We’re not too big on bragging about our accomplishments.”

A lot has been made of the fact that three horses had to be euthanized at Santa Anita over a 16-hour period. During training hours Saturday, an unraced horse named Just Forget It (Old Topper) also had to be put down.

Hollendorfer refused to blame the track.

“If I would have thought there was anything wrong with the track, I certainly wouldn’t have worked Battle of Midway yesterday,” he said.. “I worked some other horses, too, including Gunmetal Gray (Exchange Rate), who I’m preparing for the [GII] San Felipe. You can pick anything out and criticize it, but before you go out in public and say something you should have all your facts in line. I don’t have enough facts to tell you the track is bad. I worked a lot of horses today and will work more tomorrow. I wouldn’t take any out to that track if I thought they weren’t going to make it back to the barn.”

Jockey Jorge Calderon hadn’t won a race at the current Delta Downs meet. He didn’t win any races anywhere in 2018 either. In fact, the last time Calderon won a race was in 2013. Not that he hadn’t had plenty of chances.

If you start with 2014, Calderon had lost at least 247 straight races. So imagine his joy Friday night at Delta Downs when he booted Wildly Grand (Grand Appointment) across the wire two lengths ahead of his nine rivals.

The thrill of victory? No, it turned out to be the agony of defeat.

The stewards ruled that Calderon’s mount ducked in nearing the sixteenth-pole causing another horse to check. She was placed fourth in what was a fairly obvious call. And poor Calderon is highly unlikely to get the mount back as Wildly Grand was claimed by trainer Dale White Sr., who does not use the snake-bitten jockey.

From Sunday Feb. 18 through Saturday’s card, they combined to win 30 of the 70 races run at the track. On Thursday, Friday and Saturday, they won 18 of 35 races–or more than half the races carded. While Jose is having a good meet, Irad is on a mission. During the six racing days last week, he alone won 21 races, including a six-bagger Monday.

Not to be outdone, Jose closed the week out with a bang, posting four wins on Sunday’s 13-race card.