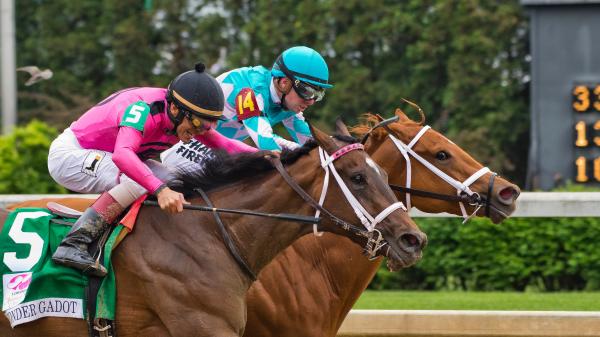 After going 37 years without a Triple Crown, horse racing celebrated its second Triple Crown winner in just the last four years as Justify joined the ranks of 2015 champion American Pharoah when he captured the 2018 Kentucky Derby, Preakness Stakes and Belmont Stakes. Not only was 2018 the year of Justify, it’ll also be remembered for dozens of heart-stopping races, thrilling battles and long-shot winners for the ages. We’re looking back on the year by counting down the top 15 races, one race a day, until the calendar turns to 2019.

*Note that our list of best races for 2018 only includes races run in North America.

To view the other top 15 races, click here and scroll down.

There was perhaps no horse more consistent over a longer period of time in 2018 than Monomoy Girl. She raced seven times and crossed the line first in all seven races (a disqualification in the Cotillion Stakes in September resulted in her being placed second). One of her gutsiest efforts was in the Longines Kentucky Oaks. In a true test of heart, she battled throughout the stretch with Wonder Gadot and ultimately triumphed en route to a memorable season that ended with a victory in the Longines Breeders’ Cup Distaff.