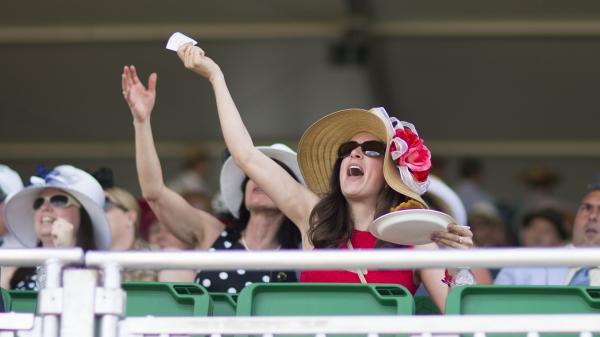 The 77th running of the Grade 2, $400,000 Fountain of Youth Stakes at Gulfstream Park appears to be a bellwether race on the Road to the Kentucky Derby presented by Woodford Reserve with 11 horses lined up and a few appearing poised for breakout efforts. Those proven in top company already include Grade 3 Nashua Stakes winner Vekoma, a talented colt but one attempting to run two turns for the first time, and off a four-month layoff whereas many of the rest have already run this year. Similarly, Grade 2 Kentucky Jockey Club Stakes winner Signalman returns from 14 weeks away from the races.

Of the recent runners in top company, recent Grade 2 Holy Bull Stakes runner-up Everfast may be a factor. There are also a trio of impressive recent winners at Gulfstream Park in maiden or allowance races– Hidden Scroll, Global Campaign, and Bourbon War, with any of the trio appearing capable of stepping up to this graded stakes level and winning. Code of Honor is another with proven form at the level, having finished second in the Grade 1 Champagne Stakes last fall before a disappointing fourth-place effort as the favorite in the Mucho Macho Man Stakes in January. Epic Dreamer may be the early leader, as he led from the start and into the stretch in the Holy Bull before fading to fourth. Gladiator King is another potential early leader as he stretches out to two turns off a third-place finish in the Texas Glitter Stakes, a five-furlong turf sprint. Frosted Grace enters the race off a fifth-place finish in the Grade 3 Swale Stakes over the track last month, while Union’s Destiny most recently finished third in the Smooth Air Stakes at Gulfstream Park in December.

Looking at all the factors which suggest how much some horses will improve from race to race as well as their pedigree to become one of the top 3-year-olds this winter and spring, I’ve landed on Global Campaign. Not only do the chart caller’s comments “wrapped up” describe his two authoritative wins in two starts to date (the most recent at the distance of the Fountain of Youth), the colt is bred to be a star. He’s by Curlin, not only the sire of last year’s Toyota Blue Grass Stakes and Haskell Invitational Stakes winner Good Magic but also winner of three important graded stakes (Rebel Stakes, Arkansas Derby, and Preakness) as a 3-year-old himself. Perhaps just as important, Global Campaign is out of the mare Globe Trot, who has produced two stakes-winning horses to date, including one of last year’s other top 3-year-olds, Bolt d’Oro. In trying to validate whether the “wrapped up” comments did justice to how easily he won both starts to date, I watched the videos and indeed, Global Campaign was in a league of his own in the last three-eighths of a mile in both races, giving no other horse a chance. His Equibase Speed Figures of 98, then 99 are lower than other horses in the race, most notably likely favorite Hidden Scroll, but when considering how much more Global Campaign may have in the tank based on not having been asked to run hard in both races as well as based on his tremendous breeding, I expect a graded stakes-winning effort from the colt in the Fountain of Youth.

Bourbon War was also pretty impressive winning at Gulfstream at the distance of the Fountain of Youth in his most recent race, boldly rallying between horses on the turn to go from fifth to first by the time the field hit the eighth pole. Drawing off under his own power, Bourbon War earned a very strong 107 figure, which might be one of the best at this time of year if not for the 115 figure Hidden Scroll earned eight days later. However, Hidden Scroll earned his big figure on a sloppy track and in a one-turn mile race and has yet to run two turns, whereas Bourbon War has three races under his belt and is making his second start following seven weeks off, and so has lots of room to improve. The 2018 Eclipse Award-winning jockey Irad Ortiz Jr. rode Bourbon War in victory in January and rides again. As a son of Tapit, who has sired many 3-year-old graded stakes winners over the last few years, including 2016 Fountain of Youth winner Mohaymen, there’s little doubt Bourbon War has what it takes to perform well enough to win this race.

Hidden Scroll absolutely dominated a 13-horse field in his debut in late January. He took the lead shortly after the start and widened until geared down to a 14-length victory. The 115 figure he earned is the best figure I’ve ever noted a 3-year-old earning in the first half of the year. As a son of Hard Spun, the added distance and two-turn nature of the Fountain of Youth should not pose a problem. However, Hidden Scroll has only raced once and he has never raced around two turns as he is being asked to do in this race. Trainer Bill Mott is not known for winning with a high percentage of horses in their racing debuts, so the win by Hidden Scroll in his debut bodes well for another top effort. Additionally, Mott had good success with Hofburg last year when he entered the maiden winner to run second in the Florida Derby. As such, we should not discount the chances of Hidden Scroll dominating once again.

Everfast is a horse likely coming in under the radar who must be respected, in my opinion. After winning his debut last August in a seven-furlong sprint, Everfast didn’t do much in five races, including three stakes. However, in his second race as a 3-year-old, Everfast finished second of nine in the Holy Bull Stakes at odds of 128-to-1. The 102 figure was decent enough compared to most of the main contenders in the Fountain of Youth and it is reasonable to project he will run better in his third start off the layoff.

Note about two others: As mentioned in the opening paragraph, Vekoma (110 best figure winning the Nashua Stakes) and Signalman (95 best figure when third in the Breeders’ Cup Juvenile, before winning the Kentucky Jockey Club Stakes with a 92 figure) both return from layoffs significant enough I think they are at a disadvantage to the four contenders above. According to a STATS Race Lens query I ran, trainer Kenny McPeek (Signalman) has a 1-for-27 record with horses coming back in routes from this type of layoff over the last two years, while trainer George Weaver (Vekoma) has a 0-for-8 record. It is certainly conceivable Signalman and Vekoma can run well and be in the top four to earn Kentucky Derby points, but I do not believe either will win.