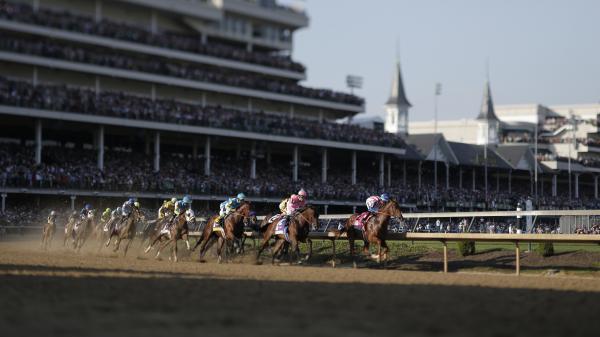 Horse racing in the United States is an extensive sport that spreads across the country and facilitates some wide-ranging betting opportunities. From small races to some of the biggest events in the world of horse racing and everything in between — you will find it all in U.S. horse racing.

In this article, we briefly look at some of the biggest horse racing events on the U.S. racing calendar, and you can find all the latest horse racing news from across the world right here.

They don’t come as thick and fast as the Kentucky Derby. Most consider this the holy grail of horse racing events in the U.S., and it is hard to disagree. The 1 ¼-mile Kentucky Derby is classified as a Grade 1 race — the best of its kind — and is scheduled for the first Saturday of every May.

The venue for this historic and prestigious horse racing event is Churchill Downs in Louisville, Ky.

A massive $2 million in prize money is up for grabs, and the Kentucky Derby attracts all the best 3-year-olds, jockeys, trainers, and owners in the business to fight it out for the prize.

For bettors, this is one of the best horse racing events to wager on and make some serious bank. This year, the Kentucky Derby was won by Country House — a massive underdog at odds of 62-1.

Country House was awarded the win even though Maximum Security had crossed the finish line first. The racetrack stewards subsequently disqualified maximum Security for interference after he changed lanes without clearance on the final turn and impeded other horses.

The month of May is one of the best for U.S. horse racing. The Preakness Stakes is held the third Saturday of every May at Pimlico Race Course in Baltimore. It is the second fixture in the U.S. Triple Crown. The race is contested at a distance of 1 3/16 miles on the dirt.

This is the final race of the U.S. Triple Crown. Called the “Test of the Champion,” the Belmont Stakes is held every year in June, three weeks after the Preakness. Featuring a purse of $1.5 million, the race is held at Belmont Park at a distance of 1 ½ miles (12 furlongs) on the dirt.

Legendary Secretariat landed the Triple Crown at Belmont in 1973 and set a North American record of 2:24 for 1 ½ miles while winning by a Belmont Stakes record margin of 31 lengths. No horse has been able to better either record in the 46 years since Secretariat’s dominant performance.

Sir Winston was the Belmont Stakes winner in 2019.

The Breeders’ Cup World Championships is a dynamic event with a new panache every year. Sheikh Mohammed bin Rashid al Maktoum has won 12 Breeders’ Cup races (either alone under his name, Godolphin Racing, or Darley or in partnership) and jockey Mike Smith is the most successful all-time rider at this event with 26 wins.

This year, the Breeders’ Cup will be held Nov. 1-2 at Santa Anita Park in Southern California with 14 championship races.

In terms of some current odds for the featured Breeders’ Cup Classic, Maximum Security is at 9-1, McKinzie has odds of 6-1, and Thunder Snow, Game Winner, and Omaha Beach are all at 10-1. However, for some of the best horse racing tips and additional betting odds information, feel free to check out https://www.onlinesportbetting.ca/horse-racing-betting/.

The Travers Stakes is a 1 1/4-mile race that serves as one of the highlights of the U.S. horse racing calendar and a marquee summer event. The Travers Stakes, often referred to as the “Midsummer Derby,” is the oldest major stakes race in the U.S. having first been conducted in 1864.

The Travers is held at picturesque Saratoga Race Course in Saratoga Springs, N.Y.

Four Triple Crown winners have run in the Travers but just one, Whirlaway in 1941, has won the race. Seven fillies have defeated males in the Travers, but none since Lady Rotha in 1915.

Javier Castellano guided Catholic Boy to victory in the 2018 Travers for his record sixth win in the race. This year, Hall of Fame trainer Shug McGaughey won his fourth Travers with Code of Honor, who rallied to win by three lengths Aug. 24.