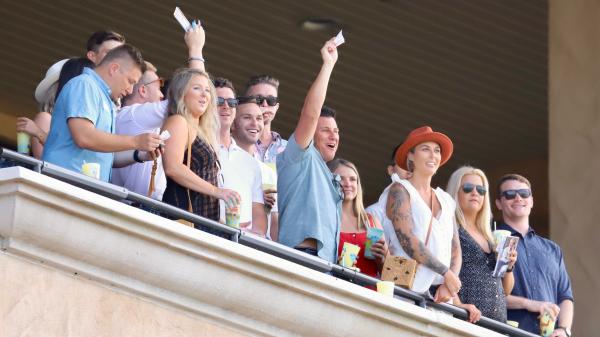 The Grade 1, $300,000 Del Mar Debutante, run at seven furlongs, sets the stage for the major Breeders’ Cup Juvenile Fillies prep races in the coming weeks, most to be run around two turns. Only two of the eight entered in the Del Mar Debutante have run in stakes, with Comical having shipped to New York to win the Grade 3 Schuylerville Stakes in July before a dismal sixth-place effort in the Grade 2 Sorrento Stakes at Del Mar four weeks ago. Powerfulattraction finished second in the Sorrento after breaking her maiden at the end of June and appears to fit with these. Five of the other six fillies step into the big leagues following maiden-breaking scores, those being Inspiressa, Lazy Daisy, Leucothea, Pure Xena, and Stellar Sound. Bast, who rounds out the field, is still a maiden after one race in which she finished second to Inspiressa earlier this month.

Leucothea did not run well in her career debut at Ellis Park in Kentucky on July 4, but when blinkers were added for her second start on Aug. 15 she was a different horse entirely. Taking the lead within a few strides out of the starting gate, Leucothea was up by 2 ½ lengths after a quarter-mile, was ahead by six lengths after a half-mile, and coasted home by 14 lengths in “ridden out” fashion. The Equibase “early” pace figure of 93 she earned on the lead in that race is by far the best in the field, as is the 104 Equibase Speed Figure. As a daughter of 2008 Breeders’ Cup Juvenile winner Midshipman, who also won the Del Mar Futurity at the distance of the Debutante, there’s little doubt Leucothea can handle this seven-furlong trip. Although a few others in here also earned their only wins by leading from start to finish, they just aren’t as fast in the early stages as Leucothea, so I expect this filly to run the field off their feet early and once again coast home to a decisive win.

Bast showed some maturity in her career debut three weeks ago when, in spite of breaking a bit slowly to be away seventh of eight, she did not rush up to contend and instead relaxed nicely in the early stages. Advancing from sixth to fourth, then to second at the top of the stretch, Bast could make no further headway against the winner of that race. That winner was Inspiressa, who may be hard pressed to repeat her effort leading from start to finish because of the fact Leucothea may be much faster in the opening stages of the Debutante. Earning a pretty strong 94 speed figure with that effort, Bast adds blinkers for the Debutante, probably as a way to get her to focus and break with the field as the starting gate opens this time. The blinkers may also help her to have better early position than in that last race, and if she can harness the same kick in the late stages in this race as she showed in the middle of her last race she could earn Bob Baffert his first win in this race since Executiveprivilege in 2012.

Pure Xena and Inspiressa were both impressive winning their only starts. Pure Xena led early then relinquished the lead by a half-length after a half-mile before dominating by 11 ¼ lengths. That effort earned a strong 98 speed figure, so the only question about her being as competitive in this situation is whether she can relax in second, or third (depending on what Inspiressa does), in the early stages and run as well. Inspiressa appears a bit more likely to be able to relax in the early stages because she gets an outside post so jockey Victor Espinoza will be able to take his time getting her closer to the rail, provided her competitive instinct doesn’t kick in and make her battle for the early lead. In victory, Inspiressa earned a 97 Equibase Speed Figure, which is on par with Pure Xena. Aside from the question about her being able to relax in the early stages, Inspiressa, like Pure Xena, has room to improve in only the second start of her career.

The rest of the field (with best Equibase figures in a representative race): Comical (86), Lazy Daisy (80), Powerfulattraction (87) and Stellar Sound (78).