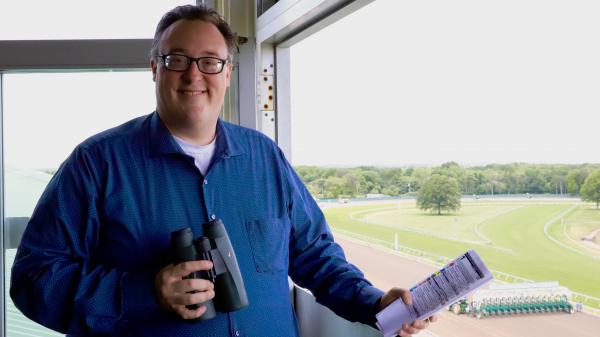 When Colonial Downs reopens Aug. 8 after a five-year hiatus, announcer Jason Beem will welcome back race fans as the voice of the track. He will also contribute to race analysis, handicapping and social media.

In the past twelve months, Beem filled in as race caller at Monmouth Park and Gulfstream Park West in addition to hosting BetAmerica Radio Network’s podcast five days a week. Previously, Beem was the announcer at Portland Meadows, River Downs (now Belterra Park) and Louisiana Downs.

Beem was born in the suburbs of Seattle on the day Mount St. Helens erupted in 1980. He has fond memories of frequenting Longacres, a track in the area that ran from 1933 to 1992, with his father and witnessing some of Hall of Fame jockey Gary Stevens’ early successes. His father held him on his shoulders as Snipledo won the Longacres Mile, the track’s signature race, and taught him how to read the Racing Form, make bets and read the odds.

“He had this real gravelly voice. It sounded like he had smoked a pack of cigarettes right before every call. So I would go home after the races – our neighborhood was a perfect oval – and I would ride my bike and do the race calls. I would say ‘Here’s Captain Condo on the outside,’” Beem said. “I’d have a stick and I would whip my bike. My mom always laughs that I was doing career preparation when I was six years old.”

Longacres closed when Beem was 12. He became preoccupied with baseball and was not very involved in racing for almost ten years. In 2000, his father was diagnosed with skin cancer.

“Taking care of him also meant taking him to Emerald Downs. Most nights we would go to the bar that was closest to the entrance so he didn’t have to walk too far. He passed away in July of 2001. After he died, I just kind of kept going. It was keeping that attachment.”

Beem graduated from college the next year. He went to law school for one year.

His mom was co-owner of a poker room named Diamond Lil’s, and Beem worked part-time for her as a floor man, running poker chips and the waiting list and helping the dealers. He also made a foray into real estate.

The move to the mic

Beem took his first job in racing at Emerald Downs in 2004, working in the media department writing stories and notes. He became friends with Robert Geller, who was the announcer for the track’s first 20 years and now calls at Woodbine and Sunland Park. Their friendship led Beem to contemplate a move to the booth. Beem’s decisive moment came while watching Hollywood Park’s 2005 American Oaks.

“Vic Stauffer’s call of that race made the hair of my arms stand up,” Beem said. “In that moment I thought, ‘I’ve gotta do this.’ The next day I went and bought binoculars.”

He started practicing on the roof at Emerald Downs. When that season ended, he moved his training to Portland Meadows.

On Jan. 8, 2006, Portland announcer Mike O’Brien, who noted Beem’s vigorous practice schedule, invited Beem to call a race. The horse that won was named A Colt Named Sue, and he was trained by one of Beem’s friends.

Beem kept practicing at Portland Meadows and was given the opportunity to call races periodically. One day, O’Brien was ill, and Beem filled in for an entire card. He made a demo tape and sent it to several tracks, including River Downs, who offered him the job.

O’Brien left Portland Meadows, and Beem was hired as the replacement, so he called River Downs in the spring and summer and Portland Meadows in the fall and winter. In 2008, Portland Meadows offered him a year-round position announcing and working in media and marketing, a role he held through the end of 2014.

Next, Beem went to Louisiana Downs. Frank Mirahmadi and Travis Stone held the position previously and had gone on to larger stages, so Beem saw Louisiana Downs as his Triple A, his chance to get to the big time. He was there for one quarter horse meet, when anxiety, something he struggled with when he left law school, recurred, and he left.

Beem became a racing Twitter sensation by establishing the Beemie Awards, a mock awards show on the social media platform. Past categories include Best Fight, Best Humblebrag and Best Hair.

“Our online community can be pretty funny. I was interested in doing the Dumbest This and goofy stuff,” Beem said.

“I took the job at Louisiana Downs the Tuesday before. And I remember thinking, ‘Maybe I shouldn’t do this because I just took this job. It’s a good job. They are going to think they hired a goofball. Which they did.’ But I ended up doing it, and it got good reception.”

2019 marked the fifth Beemie Awards. The production prompted Jeff Bloom of Bloom Racing to name a Thoroughbred Beemie Award. The dark brown gelding broke his maiden at Oaklawn Park on May 3. Beem owns a small percentage of him.

After Louisiana Downs, Beem thought he was done with racing. He drove for Uber and preferred to stay in his home or car. But he decided to “host” the Beemie Awards a second time. And it caught the attention of BetAmerica, who approached him about joining their team. Beem pitched the podcast, and the first episode aired Jan. 4, 2016.

“We wanted to create a place to have good racing conversation but also to be able to have some fun and be a little bit lighter about racing,” Beem said.

Beem said standout guests include Brian Hernandez, Jr., who is open about his mounts, races and jockey lifestyle, and a professional horseplayer named Inside the Pylons, who keeps his name private. In two episodes, they discussed his 20 years of horse betting being his job and gave listeners practical insider tips.

“Every week, we still get dozens and dozens of downloads on that episode. It’s been seven months. It’s a great resource for horseplayers,” Beem said. “I believe horseplayers are the backbone of the industry, so we do a lot of betting and strategy-style themed episodes.”

Back in the booth

Beem assumed his announcing career was over. He applied for seven or eight jobs and did not garner interest.

“Out of nowhere, last summer, Pete Aiello called. He was planning for his vacation [from Gulfstream Park West], and he thought I would be the perfect guy to fill in. In the subsequent time, I hadn’t travelled much because that was a trigger for my anxiety, but my mantra for the past year was ‘just say yes.’ So I took Pete up on it, and it went well. Shortly after that, the phone started ringing.”

Beem accepted a role to fill in at Monmouth Park for Frank Mirahmadi, whose other announcing job at Santa Anita Park overlaps with the Monmouth season. Beem had never been to New Jersey before he accepted the job.

He embarked on a cross-country trip from his home in Renton, Wash. He made stops at Churchill Downs, Hawthorne Race Course and Canterbury Park. Friends he made through Twitter joined him along the way.

“They’ve only had a handful of guys there that have called races recently, and if you look at Monmouth Park’s last three announcers – Larry Collmus, Travis Stone and Frank Mirahmadi — you’re talking about the guy who calls the Breeders’ Cup, the guy who calls the Kentucky Derby and the guy who calls Santa Anita,” Beem said. “So I’m flattered even as a fill-in to have the opportunity to call there. And the racing is among the best in the country.”

“I was pretty nervous before the race, and so when the last horses were going in, I clicked off the mic and took a deep breath, and I just reminded myself, ‘You know how to do this. You’ve done this 10,000 times,’” Beem said. “And halfway through the race, I remember thinking, ‘I’ve got this. I’ve got this. It’ll be okay.’ When they hit the wire, I turned the mic off and I yelled pretty loud. I just felt good about doing it and not giving in to my fears, which for so many years was my struggle. It was a really rewarding moment.”

Around the time Beem agreed to fill in at Monmouth, he heard from Colonial Downs. Jill Byrne, Vice President of Racing, witnessed the fifth Beemie Awards and liked how Beem engaged racing Twitter. She asked Beem to send his demo tape, and he was offered the position.

“I’m really excited because it is a rebirth for the track. It’s neat to get in at the ground level and be a part of restarting something that will hopefully be really good,” Beem said. “Jill and her team are so excited. I’ve been a part of some teams where passion isn’t exuding. So when you do have people who are really excited about bringing racing to the area, it really makes the job a lot more fun.”

He is looking forward to calling the Virginia Derby.

“Being at Monmouth gave me a taste of how fun it is to call big races. Filling in there and at Gulfstream really rekindled my enjoyment of calling races. I love the fact that I get to be creative and to work on a craft,” Beem said. “I’m thrilled I get to continue at Colonial Downs. I love the idea of doing the show year round and having a couple months where I get to call races.”

An eye on the future and a look to the past

Beem stayed in the northeast between his Monmouth stint and reporting to Colonial Downs. He went to Suffolk Downs for the track’s final day of live racing before permanently closing and to Saratoga, Woodbine and Fort Erie Race Track. He also went to a Boston Red Sox game and to New Hampshire and Maine.

“I don’t want to sound braggy, but I’m proud of myself because for a lot of years I wouldn’t have even tried to do the stuff I am doing,” Beem said. “It’s been more than career enhancing. It has been personally enriching.”

The movie rights to “Southbound,” a novel he wrote about a compulsive gambler that includes elements of his own experiences, have been optioned, and Beem is working on the script. He is also writing a second novel. It takes place in the world of college hockey and focuses on a father-son relationship.

Beem’s goals for the future are to keep working in racing as long as he can.

“I love the sport and I love the people. If I could keep doing radio and announcing for my career, I’d love to do it. I’ve found I’m at my best personally, professionally, emotionally when I get to be creative, and I find announcing and radio to be rewarding in that sense.”