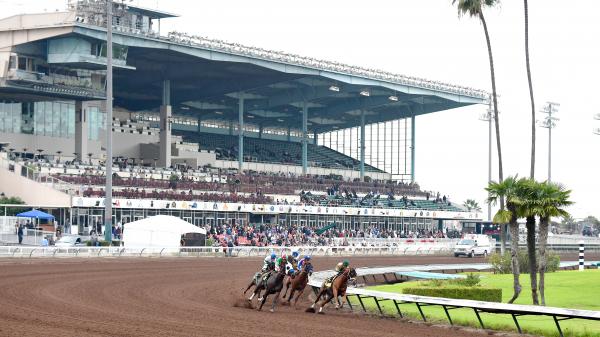 Saturday’s Grade 1, $300,000 Los Alamitos Cash Call Futurity, a “Road to the Kentucky Derby” points race, drew a sparse field of six with all having promise, particularly based on recent history. The winner of the race last year was McKinzie, an early Derby favorite before being sidelined in March. In 2016 the race was won by Mastery, who returned to win the important San Felipe Stakes in March before being sidelined then retired with a perfect 4-for-4 record. Both horses were trained by Bob Baffert, who won the race the prior two years as well with Dortmund (2014) and Mor Spirit (2015).

Baffert attempts to win the race for the fifth year in a row with either of a pair of runners in Improbable and Mucho Gusto, both stakes winners in their most recent starts. Hall of Fame trainer Richard Mandella saddles Extra Hope, recently fourth behind Mucho Gusto in the Grade 3 Bob Hope Stakes but a powerful 8 ¾-length winner at the distance of the Cash Call Futurity prior to that. Savagery finished second behind Mucho Gusto in the Bob Hope and hopes to improve in his first two-turn dirt race, while Dueling, who finished sixth in the Grade 1 Breeders’ Cup Juvenile, hopes to rebound to the form shown in winning his two-turn debut before that. King of Speed rounds out the field, trying dirt route for the first time but a dual stakes winner on turf after capturing the Del Mar Juvenile Turf Stakes and Zuma Beach Stakes in September and October before a 12th-of-14 finish in the Grade 1 Breeders’ Cup Juvenile Turf last month.

Extra Hope took four races to finally break through but he did so in a big way when blinkers were added, coasting home to nearly a nine-length win in October when trying the distance of the Cash Call Futurity for the first time. That effort earned a 101 Equibase Speed Figure, the best figure earned by any horse in the field. Cutting back to seven furlongs for the Bob Hope Stakes last month, Extra Hope ran pretty evenly around the track when fifth after a quarter mile and fourth at the wire, proving no match for winner Mucho Gusto and runner-up Savagery. However, the return to two turns, particularly as only one other horse in the field (Dueling) has run two turns on dirt, could signal a return to the form shown in October.  That effort is better than the rest of the field and as such if Extra Hope can repeat it, he should win.

Dueling is the other horse to have won a two-turn race on dirt. He did so at the end of September in his third career start and first route race, earning a 97 figure in the process under jockey Mike Smith. Smith did not ride Dueling in his next start when a well-beaten sixth in the Breeders’ Cup Juvenile but returns to the saddle for this race. Although the Juvenile and this Cash Call Futurity both carry a Grade 1 ranking, this is an easier spot compared to the Juvenile. Dueling has a very nice chance to repeat, or improve upon, his route effort one before last and if he does either he would be very competitive in this field.

Improbable and Mucho Gusto are saddled by Baffert, who continues to dominate this race. Baffert has trained the winner of this race four years in a row and, perhaps even more impressively, in seven of the last 10 editions of the race. Improbable broke his maiden at the end of September in his debut at the distance of six furlongs with a strong 94 figure then ventured to Kentucky to win the non-graded Street Sense Stakes by 7 ¼ lengths with a 100 figure. Improbable is an improving type but is trying two turns for the first time so is giving experience away to both Dueling and Extra Hope in that regard. Mucho Gusto won the Bob Hope Stakes last month with a 100 figure after a 96 figure effort in his debut. He made that improvement going from six furlongs to seven furlongs and can certainly improve once again, but like his stablemate, Mucho Gusto is trying two turns for the first time. Of the pair, I might give a slight probability edge to Improbable based on his rail draw but overall both should be counted as contenders to win this race.

King of Speed earned a career-best 100 figure winning the Zuma Beach Stakes on turf in October before a 12th-place finish in the much tougher Breeders’ Cup Juvenile Turf. He made his first two starts on dirt and finished fourth both times, so although the Zuma Beach figure would be competitive if repeated in this field, the question of doing that when unproven on dirt is a concern. Savagery has earned 91, 94, and 94 figures in his last three races including runner-up finishes in the Sunny Slope Stakes and Bob Hope. He was well beaten by Mucho Gusto in the latter race and has yet to run two turns on dirt so although he may run competitively again for a runner-up spot he’s not a win contender in my opinion.