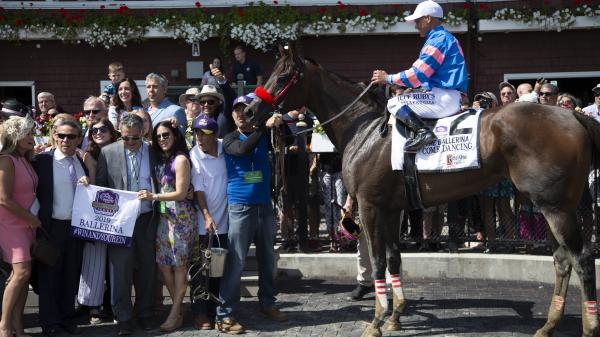 Third-generation horseman Carlos Martin wants desperately to honor one of the most prominent surnames in New York racing by winning the $1 million Breeders’ Cup Filly and Mare Sprint with Come Dancing Nov. 2 at Santa Anita.

The grandson of Hall of Famer Frank “Pancho” Martin worked for his father, Jose, when his father sent Groovy to compete in California in the Sprint at Santa Anita in 1986 and at old Hollywood Park in 1987. Although Groovy was favored both times, he could do no better than fourth and second.

The latter defeat was particularly agonizing because Carlos, then a teenager, had accompanied Groovy to the West Coast well ahead of the race and was convinced they were sitting on a victory.  When the filly Very Subtle got the jump on Groovy and dusted him by four lengths, he felt as if the weight of the world had crashed down on him.

“I was crushed,” he recalled. “For a couple of weeks, I wanted to stay in the hotel room.”

The incessant nature of the business and his unflappable father would not allow that. “There were never any pity parties with him around,” Martin said of Jose. His father died in 2006, six years before Carlos’ famous grandfather.

As Martin, now 50, prepares Come Dancing for a showdown with the brilliant 3-year-old Covfefe in the Filly and Mare Sprint, he cannot wait for Nov. 2 to arrive.

“It’s the culmination of so much hard work and generations of the family being excellent at what they do,” he said. “Obviously, I never try to compare myself or live up to the pressure of what my grandfather and father have done. I know that is not going to be possible. I just try to do the best I can.”

Whatever happens during the much-anticipated showdown with Covfefe, Martin has done an exceptional job in developing Come Dancing, a 5-year-old mare, on behalf of Marc Holliday’s Blue Devil Racing Stable. Holliday operates a small breeding operation and decided to retain the daughter of Malibu Moon out of the Tiznow mare Tizahit because she was a bit offset and a bit crooked in her right front leg.

“The sales people are very particular. If there is any blemish whatsoever, the sales value falls way off,” Holliday said. “There was no way I was going to give a beautiful filly away like this for a price I did not think was worth it.”

Come Dancing has been a project that finally reaped its greatest reward this season. She has won four of five starts for $798,250 of her $1,054,950 career earnings. The highlight of the year came when she captured the Grade 1 Ketel One Ballerina Stakes Aug. 24 at Saratoga Race Course, a seven-furlong race that carried an automatic, fees-paid entry into the Filly and Mare Sprint as part of the Breeders’ Cup Challenge Series.

The Ballerina represented the first Grade 1 triumph for Martin since Buy the Firm took the Top Flight Handicap in 1991.

Holliday describes the well-respected Martin as “exactly the right kind of trainer” for Come Dancing.

“He runs a modest-sized operation. He focuses on quality over quantity. He’s very hands on, a seven-day-a-week kind of guy,” the owner said. “He’s probably one of the hardest-working trainers I’ve been affiliated with. He’s in there in the stall with my horses every day.”

Holliday went on, “She needed and needs that kind of attention because, when she’s completely sound and in condition and in a good frame of mind, I don’t think there’s a better sprinter out there on the grounds right now. But to get her there, we had to be very patient with her and pay a lot of attention to her.”

Come Dancing prepped for the Filly and Mare Sprint by coasting to a 3 ¼-length victory for regular rider Javier Castellano in the Grade 2, $300,000 Gallant Bloom Handicap on Sept. 22 at Belmont Park. She covered the 6 1/2 furlongs in 1:14.96.

Covfefe, from Brad Cox’s increasingly powerful barn, made her final start leading to the Breeders’ Cup when she dominated by eight lengths in the $125,000 Dogwood Stakes at Churchill Downs Sept. 21. She narrowly missed breaking Groupie Doll’s track record of 1:20.44, blistering the seven furlongs in 1:20.51.

Every trainer has much at stake at the Breeders’ Cup, but none more than Martin.

“The Breeders’ Cup would validate that there is another Martin who can train beyond Jose and Frank Martin,” he said.