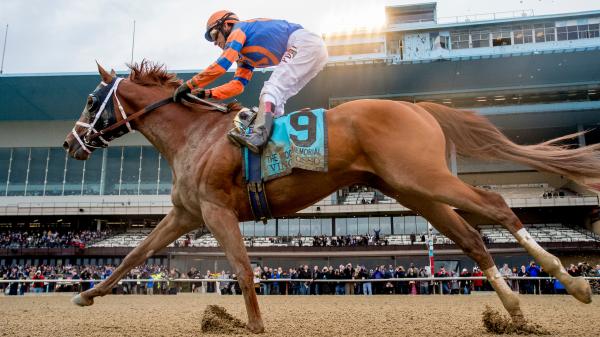 In recent years, the $750,000 Grade 2 Wood Memorial Stakes Presented by NYRA Bets at Aqueduct, has been a fairly predictable race. There hasn’t been a single winner of New York’s final prep for the Kentucky Derby Presented by Woodford Reserve at double-digit odds in the last ten years, and eight of the last ten winners started at less than 9-2.

One of the reasons the Wood Memorial has been so predictable is because it tends to be won by similar horses year in and year out. In other words, it’s a “trendy” race where an examination of history can give you a clear-cut idea of what to look for when searching for the winner in any given year.

The 2019 Wood Memorial is coming up on April 6, so with that in mind, let’s dig into the data and come up with the profile of a typical Wood Memorial winner….

Trackers and Closers Have the Edge

The Wood Memorial has not been particularly kind to speed horses in recent years, at least not as much as one might expect. No horse has won in gate-to-wire fashion, and while five winners did prevail with pace-tracking trips, just as many winners rallied from the back half of the field. Furthermore, only two pacesetters (Battalion Runner, second in 2017, and Uncle Mo, third in 2011) have even cracked the top three in the Wood Memorial.

Maiden and allowance winners are frequently effective in some Derby prep races – the Xpressbet.com Florida Derby being a prime example – but it’s the tried-and-true stakes veterans that have been winning the Wood Memorial as of late. Six of the last ten Wood Memorial winners had previously won a graded stakes race, while the other four winners had all placed at the graded stakes level.

The Pletcher/Velazquez Team is Tough to Beat

Trainer Todd Pletcher has dominated the Wood Memorial over the last decade, scoring five victories since 2010, and during that same timeframe John Velazquez has been his go-to rider, guiding four of those winners to victory. All told, Pletcher and Velazquez have gone 4-for-7 together since 2010, with two of their losers finishing in the top three, so when you see them team up in the Wood Memorial, it’s wise to pay attention.

When top trainers ship their Derby contenders north from Florida to contest the Wood Memorial, the local runners struggle to contend for victory. Eight of the last ten Wood Memorials have been won by horses who prepped at Gulfstream Park or Tampa Bay Downs, which is even more remarkable when you consider that only 23 such shippers have contested the Wood Memorial over the last decade.

Another group to watch out for? The infrequent shippers coming off a race at Santa Anita Park in California. There have only been five over the last decade, most of them longshots, but two have finished in the trifecta, most notably the 81.50-1 runner-up Trojan Nation in 2016.

Among the horses expected to contest the 2019 Wood Memorial, one – Outshine – is a perfect match for the historical profile of a Wood Memorial winner. Trained by Todd Pletcher, this pace-tracking colt will be shipping north from Florida, where he finished a good second in the Lambholm South Tampa Bay Derby on March 9. Jockey Joel Rosario was in the saddle that day, but John Velazquez had been aboard for Outshine’s first three races and could regain the mount in the Wood Memorial, reuniting the Pletcher/Velazquez team that has been so successful in recent editions of this race.

If you’re willing to play against Pletcher and Velazquez – after all, they can’t win them all! – then the Tampa Bay Derby winner Tacitus becomes appealing since he matches every other aspect of the historical profile. But don’t assume that Tacitus is better than Outshine just because he won the Tampa Bay Derby. Tacitus enjoyed a great trip rallying into a fast pace that day, and the more forwardly-placed Outshine arguably turned in the more impressive performance.