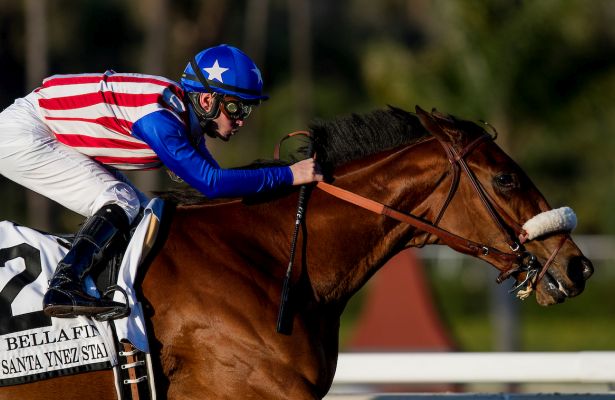 With an eye-popping 8 ½ length win in
the Santa Ynez Stakes (G2) Sunday, Bellafina
showed she is still a top name when it comes to Kentucky Oaks 2019 prospects.
It was also a successful rebound at Santa Anita since returning from a
fourth-place run in the Breeders’ Cup Juvenile Fillies.

Trainer Simon Callaghan and owner
Kaleem Shah have been high in Bellafina since the beginning. The Santa Ynez
reaffirmed that she was still the same filly who dominated the Del Mar
Debutante (G1) and the Chandelier Stakes (G1) at 2.

“She wasn’t even blowing. Just standing after
the race, she was so composed and it was like it was nothing for her,”
Callaghan said. “We’ve always thought a lot of her and made no secret of that,
so it was nice to see her put on that sort of performance.”

Of course, the
competition gets stiffer as the Oaks preps continue. American Pharoah’s
half-sister Chasing Yesterday proved herself a worthy contender last out in the
Starlet Stakes (G1) and a race between the two could provide a glimpse into the
leading sophomore filly in California.

As of right now, Bellafina appears to have claimed that spot. Her two previous
Grade 1 wins earned her a spot as a finalist for Eclipse Champion 2-Year-Old
Filly, and her Santa Ynez performance showed she is back on her game.

The Derby trail is not easy to predict

Kentucky
Derby 2019 prospects Coliseum
and Code of Honor
went off as the heavy favorites in their respective races Saturday. Coliseum
was 3-5 in the Sham Stakes (G3) at Santa Anita and Code of Honor was 4-5 in
Gulfstream Park’s Mucho Macho Man Stakes.

Both colts showed a lot of promise on the separate coasts. Coliseum was a
dominant 6 ¾-length winner at Del Mar, and Code of Honor won on debut at
Belmont before stumbling at the start of the Champagne (G1) and rallying for
second.

This weekend, both of them finished
off the board. It was the second choice in both races – Gunmetal
Gray and Mihos – that made
the trip to the winner’s circle.

With the Derby still four months away, anything can happen. Horses improve,
throw duds in between races or fall off the trail. And it’s too early to tell
what will happen with Coliseum or Code of Honor.

Coliseum is inexperienced and the Sham was only the second race of his career.
He didn’t break well and never looked involved in the race.

“He
needed the race and he got behind after he didn’t break and I was afraid of
that,” trainer Bob Baffert said.

As for Code of Honor, it was his first
start in three months.

The two deserve a second chance to show the same talent they did in their
juvenile year, but their weekend performances show that the Derby is not easy
to predict early on.

The Mucho Macho Man Stakes was the main feature at Gulfstream Park Saturday
with Derby prospects going a mile. Of the four other stakes, two of them were
for 3-year-olds sprinting six furlongs on the dirt. The winners made themselves
known later than some of the names in the Mucho Macho Man, but their
connections and Saturday performances made them worth keeping an eye on.

In the Limehouse Stakes, Stonestreet Stables’
and e Five Racing Thoroughbreds’ Seismic Jolt
won his stakes debut. The Florida-bred Kantharos colt sat off the pace, took
over early and won by 3 ½ lengths.

The performance came about a month after the David Fawkes trainee broke his
maiden third time out by five lengths at the same distance and track.

“If you look at the progression of his races,
even off his first race, he’s been moving forward with each race,” Fawkes said “As
long as he keeps his progression, we’ll be all right.”

Seismic Jolt made his first two starts on turf and is 2-for-2 on dirt so far,
but has not run beyond six furlongs yet. His ownership group liked him enough
to spend $800,000 at the OBS April sale, and it’s the same partners that
campaigned champion Good Magic.

“He’s the perfect
example of what you want,” said e Five’s Bob Edwards. “The sky’s the limit.”

LNJ Foxwoods’ Fancy Dress
Party stamped herself as one to watch with a 5 ¾-length victory in the
Glitter Woman Stakes, which was also he stakes debut. The performance kept her
a perfect 3-for-3 in her career.

Trained by Ben Colebrook, Fancy Dress
Party broke her maiden by 3 ¼ lengths during Keeneland’s fall meet and went on
to win by 2 ¼ lengths at Churchill Downs. Both races were over sloppy tracks.

The Munnings filly hasn’t been past
six furlongs yet, so how far she wants to go is still in question. That being
said, her performances have been eye-catching.

“We’re just happy to get the stakes win,” Colebrook
said. “She got kind of a late start in her 2-year-old year. She didn’t get a
break. It’s a long year and a lot of big races. I don’t know what we’ll do with
her yet.”

Next
Shares in the peak of his career

On paper, Next
Shares was no standout. He was Grade 2-placed as a juvenile, but
otherwise has only won a couple allowance races and a maiden by the end of his
4-year-old season. As a gelding, there was no breeding value and his $190,000
price tag at the 2017 Keeneland November Breeding Stock Sale seemed like a fair
deal.

Now at age 6, Next Shares is a
possible contender for the inaugural $7 million Pegasus
World Cup Turf Invitational at Gulfstream Park Jan. 26.

In Saturday’s San Gabriel (G2) at Santa Anita Park, Next Shares captured his
second graded stakes score and third stakes win by a nose. The Richard Baltas
trainee spent a successful fall in Kentucky, where he won the Old Friends Stakes
at Kentucky Downs and the Shadwell Turf Mile (G1) at Keeneland. The Turf Mile
win sent him to the Breeders’ Cup Mile at Churchill Downs, although he was off
the board that day.

Kentucky experienced a large amount of
rain leading up to the Breeders’ Cup, but the turf was firm back at Santa
Anita, even with light rain entering the area before the San Gabriel. Next
Shares stretched out to 1 1/8 miles and he hit the wire first in the last jump.
It was a step in the right direction with the Pegasus Turf run at 1 3/16 miles.
It was also a convincing performance that Next Shares could be a competitive
force at Gulfstream Park.“It’s all about the
Pegasus right now,” said co-owner Michael Iavarone. “It’s what we wanted.
That’s what we were hoping for. We tried to stretch him out today in that hope
and it worked out amazing.”