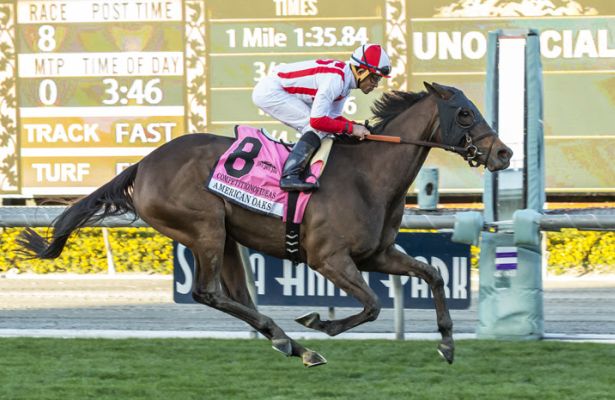 The American Oaks
(G1) was only the second stakes attempt – and the first graded one – for Klaravich
Stables’ Competitionofideas,
but it was no surprise when she shipped from trainer Chad Brown’s New York base
and bested an experienced field.

It was also a timely win with the Eclipse Awards coming up Jan. 24. Brown has
earned Outstanding Trainer the past two years, while Klaravich is seeking its first
Outstanding Owner title.

All seven of Competitionofidea’s career starts have come in 2018, and her lone
off-the-board finish was her debut. Her first stakes attempt was the Winter
Memories at Aqueduct Nov. 22, where she rallied from last to a third-place
effort at a mile. The extra quarter-mile in the American Oaks seemed to help,
as she again came from last.

Brown’s assistant Jose Hernandez was on hand for the win.

“It’s great
to finish out the year like this,” he said. “This filly had settled in real
good here at Santa Anita and she was doing good coming into this race. She
finished up really strong today.”

The strength between Brown and Seth Klarman’s Klaravich Stables has
been no secret, and it looks like Brown will have another competitive turf
filly to add to his ranks for next year. Competitionofideas also improved Klaravich’s
2018 resume even more adding another Grade 1 to the list.

In other Grade 1 events this year, Brown and Klaravich won the Breeders’
Cup Juvenile Fillies Turf with Newspaperofrecord, the Test Stakes with Separationofpowers,
the Champagne Stakes with Complexity and, in partnership with William H.
Lawrence, the Cigar Mile with Patternrecognition. Klaravich also owns the
Malibu Stakes (G1) runner-up Identity Politics and Network Effect, runner-up in
the Nashua Stakes (G2) and Remsen Stakes (G2).

With the Eclipse Awards coming up, Hronis Racing, who owns Breeders’ Cup Classic
champ Accelerate, and Justify’s ownership group (WinStar Farm, China Horse
Club, Head of Plains Partners and Starlight Racing) are certainly in the
running for Outstanding Owner. Even if Klaravich doesn’t have a horse in contention
for Horse of the Year, it’s impossible to ignore the accomplishments the stable
has racked up.

Competitionofideas was the star of the American Oaks, but third-place
finisher Amandine deserves
an honorable mention. The daughter of Shamardal only won a maiden in 11 starts
in her native Britain, but shined when transferred to trainer Jeff Mullins in
Southern California.

Amandine made her first U.S. start Nov. 22 at Del Mar going a mile in allowance
optional claiming. She rallied to win by 3 ¼ lengths, then reproduced that
effort in the one-mile Lady of Shamrock Stakes on Santa Anita’s opening day. She
was closer to the pace at Santa Anita and drew away by 2 ¼ lengths.

Three days later, she ran back in the American Oaks.

Amandine stretched out to 1 ¼ miles and settled just off the pace Saturday.
She dueled with the leader K P Pergoliscious down the home stretch and just
missed second by a head. Competitionofideas won by 2 ¾ lengths.

The filly didn’t return to the winner’s circle, but to stretch out and
finish third three days after running a big effort is impressive. She looks
like an exciting edition to the older fillies and mares turf division in
Southern California for 2019.

While a handful of stakes winners at Gulfstream Park Saturday managed
to just hang on, Phipps Stable’s Breaking the Rules coasted home by 3 ½ lengths in the Tropical Park Derby. It was the War Front colt’s eighth start of the year, with
his racing career beginning on dirt in March.

Breaking the Rules, trained by Shug McGaughey, won on debut at Gulfstream going
six furlongs on the dirt and won again on dirt at Belmont. He was the second
choice behind Mask in the Easy Goer Stakes during Belmont Stakes weekend, but
stumbled at the start, shied in the homestretch and finished sixth. He tried dirt
twice more before switching to turf at Saratoga and facing older horses.

The colt put it all together this fall when he won against older horses
at Belmont going 1 1/8 miles on turf. He cut back one-sixteenth of a mile and
returned to age-restricted company for the Tropical Park Derby and proved to
have no problem coming from off the pace.

“His progression has been really good. Being by War Front, I was always anxious
to get him on the grass,” McGaughey said. “He ran on turf at Saratoga, a horse
got loose and he came eight wide. He ran good. Then he came back and won an
allowance race the way he ran today. (Jockey) Irad (Ortiz Jr.) rode him well
and had him where he needed to be. He exploded today and ran away from them.”

In the Tropical Park Oaks, Godolphin’s Too Charming
went gate-to-wire and held off Grade 3 winner and stablemate Andina Del Sur by
a head. Like Breaking the Rules, Too Charming appears to have put things
together this fall and picked up back-to-back wins.

The daughter of Bernardini began her career at 2 and broke her maiden
this April over the Tampa Bay Downs turf. She then ran second in the Open Mind
Stakes at Monmouth before finishing 11th over a yielding turf course at
Saratoga late July.

She didn’t start again until Nov. 11 and picked up a win at Aqueduct from off
the pace before heading to Florida.

“I really liked her last race and I thought she was coming around and really
felt good going into this race today knowing [Adina Del Sur] was also a horse
to beat,” trainer Tom Albertrani said.

“I thought Adina Del Sur was going to get up – a dead-heat would have
been a little sweeter – but they both ran great.”