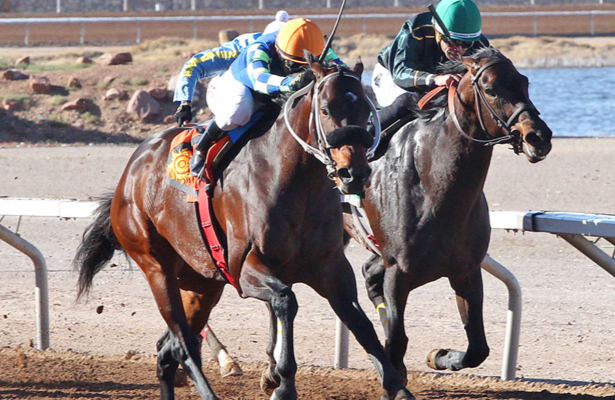 The colt who last year qualified for the Kentucky Derby but then went to the sidelines with a cracked shin has returned to open his season with a pair of victories, most recently in Sunday’s Curribot Handicap at Sunland Park.

“We’ve looked at stakes schedules for other places, but we haven’t decided on anything,” said Fincher, who will weigh whether to make one more local start before leaving town. “There’s just so many options. We’re just going to make sure the horse is all right the next couple of weeks and decide if we want to stay here or hit the road with him.

“We just hope the horse progresses, matures and gets better as the year goes on. Ultimately, it would be great if he reaches the Breeders’ Cup.”


Runaway Ghost, a Joe Peacock homebred, has won six of his nine career starts and last three dating back to the 2018 Sunland Derby (G3). Connections discovered his injury following an April 14 workout, and it wasn’t until October that the Ghostzapper colt returned to work.

Patiently handled, he won the Feb. 2 Ft. Bliss Stakes, also at Sunland Park, to open the year, looking like his old self.

“It has a lot to do with him as an individual with his heart,” Fincher said. “But also, the injury he had was a cracked shin, which will heal up 100 percent. Other horses may have a chip taken out here or there, and they never seem 100 percent after that again. They might only be 90, 95.”

Runaway Ghost is the first foal out of the New Mexico-bred Rose’s Desert, who appears to be punching above her weight as a broodmare. The second foal, Sheriff Brown, ran second in the Jan. 27 Riley Allison Derby and could have continued the state’s series of 3-year-old stakes leading up to the Sunland Derby, a Kentucky Derby prep.

For the second year in a row, however, Fincher and Peacock had to back off on a promising horse at an inopportune time.

“I thought that horse really had the breeding and was coming around to be a really nice horse at a distance,” Fincher said. “He just got a little shin issue — very minor, but something we had to stop on.”

The 11-year-old Rose’s Desert — who Peacock and Fincher campaigned as well — has a 2-year-old full sister to Runaway Ghost, a yearling by Mineshaft and, after a breeding season off, will next go to Quality Road.

“The only horses he has are the ones out of Rose’s Desert,” Fincher said. “He doesn’t purchase horses. He’s not deep into the business. He loves it, but he just wants to race his own stuff.