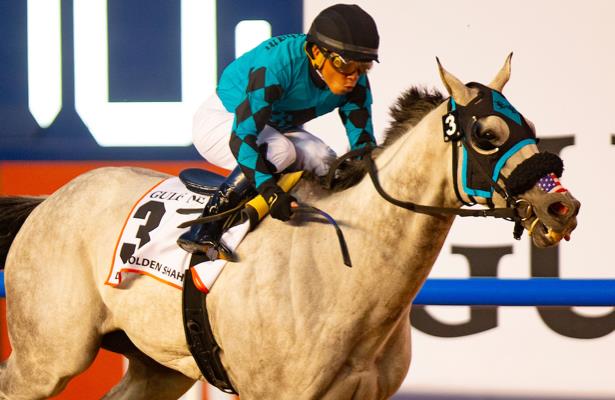 This time, X Y Jet did one better.

In a third trip overseas, the gelding exacted some revenge for a pair of runner-ups in the Group 1, $2.5 million Dubai Golden Shaheen by leading every step of Saturday’s renewal at Meydan.

Under jockey Emisael Jaramillo, the 7-year-old jumped straight to the lead and turned back the longshot Matera Sky.

“He was ready tonight,” said trainer Jorge Navarro. “I told everybody he was going to come out of there running. You were going to see the old X Y Jet today, and you got to see him.”

Americans Imperial Hint (third) and Promises Fulfilled (fourth) filled out the board.

X Y JET finally wins the Golden Shaheen, holding off Matera Sky by a length and a half to take the spoils for @JorgeNavarroRS and @JaramilloJockey


When fellow speedster Promises Fulfilled didn’t get out of the gate as well as X Y Jet, the 6-5 parimutuel favorite, that was about it for the rest. Matera Sky attempted to press, but in the end, he was only trying to keep up with the eventual winner, who’s campaigned by Rockingham Ranch and Gelfenstein Farm.

“This is my fourth year in a row,” Navarro said of traveling to Dubai, where he also saddled Sharp Azteca for a third in the 2017 Godolphin Mile (G2). “I’ve learned so much what to do and what not to do, and he proved it.

X Y Jet was making his third start off a six-month layoff due to injury that forced him to miss the Breeders’ Cup Sprint, a race won by two-time champion Roy H, who was earlier this week declared a Dubai Golden Shaheen non-runner due to a sore foot.

“I can’t believe he did it,” said Brian Trump, racing manager for Rockingham Ranch, which also campaigns Roy H. “Defeat in the past has made this victory that much sweeter. Today, it was his time. It was obviously disappointing when Roy H came out, but when this horse is on his game, he’s very hard to beat in anything he contests.

“He looked very strong the entire way around. He was in the position he needed to be in, but seeing him cross that line was so exciting. He’s such a special horse and the team has done a tremendous job with him.”

Navarro has patiently handled his gelded son of Kantharos, who has overcome multiple knee surgeries to continue as a top-class racehorse. Overall, X Y Jet on Saturday improved to 12-7-2 in 25 career starts.