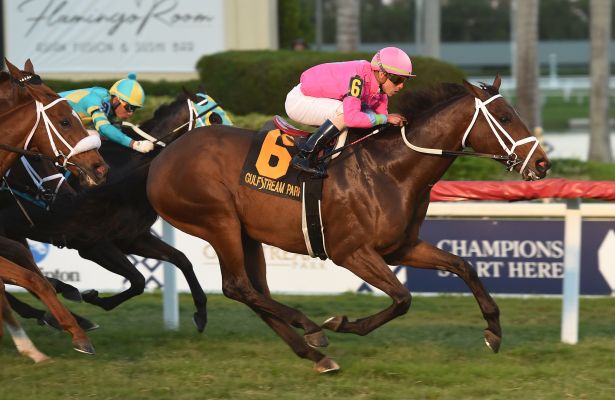 Michael Hui’s Zulu Alpha, favored at even money in a strong field of 11, came with a steady run down the center of the track to earn his fourth win in five starts and third in a graded-stakes in Saturday’s Grade 2, $200,000 Mac Diarmida Stakes at Gulfstream Park.

Ridden by Irad Ortiz Jr. for trainer Mike Maker, Zulu Alpha ($4.20) ran 1 3/8 miles in 2:16.39 over a firm turf course, holding off late-running Melmich to win by a three-quarters of a length. It was another neck back to Maker-trained stablemate Kulin Rock, sent off at 40-1, in third. Grade 1 winner Channel Maker, the 2-1 favorite, was fourth.

“We came in with a lot of confidence. Irad said he didn’t get away too good and was back a little further than we expected, but it worked out well in the end,” Maker said. “The plan all along has been to run in this race and then wait for Keeneland. He’s a very professional horse, easy to train and very classy.”

Village King was unhurried setting fractions of 24.93 and 51.05 seconds, with Channel Maker and Kulin Rock alternating the stalking spot in second. Village King remained in front after six furlongs in 1:17.71 but saw his lead diminishing around the far turn, challenged by a host of pursuers. Zulu Alpha swung widest of all for a clear run, taking over in mid-stretch to prevail.

“I got a perfect trip. I broke probably a step slow,” Ortiz said. “He’s the kind of horse that you don’t want to fight too much with him, he gets a little upset, so when we passed the first turn I put him in the clear and he started to go little by little and when I asked him to go at the three eighths pole he was moving really good. I had plenty of horse and he really took off today.”

Zulu Alpha, a 6-year-old Street Cry gelding, was claimed for $80,000 out of a win last fall at Churchill Downs. In the first start for his new connections, he captured the 1 ½-mile Sycamore (G3) at Keeneland, and capped 2018 finishing off the board in the Fort Lauderdale (G2) at Gulfstream. Last time out, Zulu Alpha was a half-length winner of the W.L. McKnight (G3) over a yielding course Jan. 26 on the undercard of the $16 million Pegasus World Cup Championship Invitational Series.

The win was the second of the afternoon for Ortiz, who also captured the $150,000 The Very One (G3) aboard Holy Helena.